How Engineers Move Massive Structures Without Breaking Them 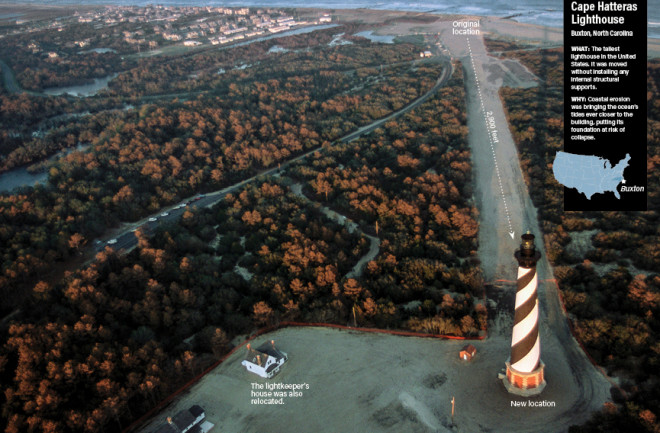 Within the next couple of years, 80 percent of the Turkish town of Hasankeyf will be submerged. The country’s water-resources agency plans to flood the area, home to 12,000 years of history, as part of the reservoir of a massive new hydroelectric dam. In preparation, workers are loading some of the town’s landmark structures onto wheeled platforms and moving them to higher ground.

This isn’t the first time engineers have been tasked with relocating massive structures. China has relocated a number of buildings over the past 20 years, from temples and homes to a four-story, 1,149-seat concert hall. In the U.S., the Hotel Pelham in Boston was moved way back in 1869, and other hotels — as well as theaters, office buildings and even lighthouses — have been relocated in the decades since.

These structures sometimes are moved to get them out of the path of urban redevelopment plans or infrastructure projects, other times to protect them from sea level rise and erosion — which, increasingly, leaves coastal buildings on shaky footing. Sometimes, critics oppose such moves, arguing they destroy a site’s cultural context.

Either way, structural relocation — generally done by towing buildings whole along roads or rails, or by disassembling and then reassembling them — presents massive engineering challenges.

Here’s how experts handled one of the trickiest moves in the United States, back in 1999: the Cape Hatteras Lighthouse.

The engineers used Ivory soap to help keep the rollers moving smoothly along the tracks.

How They Did It

Famous Moves From Throughout History

The Move That Made History

Way back in 1455, a powerful knight in Bologna, Italy, was irked by the way the bell tower of the Santa Maria Maggiore church blocked the way to the city gate. So the knight was going to have the structure demolished — until a young engineer, Aristotele Fioravanti, stepped up with a plan to relocate it instead.

That’s how the story goes, anyway. What is known, and documented at the site, is that Fioravanti successfully moved the 82-foot-tall tower, probably using a rudimentary system of rollers, to a new site 43 feet away, making it likely the first recorded building relocation. (The tower, alas, was destroyed in 1825.)

The Move That Took 30 Years

Art and artifacts from around the world adorn the grand hilltop mansion in California known as Hearst Castle. Its original owner, American newspaper mogul William Randolph Hearst, initially envisioned having another gem among the property’s treasures: an entire 12th-century Spanish monastery. So in 1925, he bought the Monastery of St. Bernard de Clairvaux, built in the town of Sacramenia, Spain, in 1141. He had workers completely disassemble the building and ship it to the U.S. in 11,000 wooden crates.

Hearst planned to have the monastery reconstructed on his property, but a turn in his financial fortunes forced the businessman to auction off most of his estate. The pieces languished in storage for over two decades. It wasn’t until the early 1950s that the building’s 35,000 stones were purchased and reassembled in Miami Beach, Florida. Today, it serves as an active church.

The Move So Smooth, It Didn’t Spill a Drop

In the 1970s and 1980s, the Romanian government carried out massive development and restructuring projects that shaped many urban centers. When it came to the city of Alba Iulia, however, there was a hitch. Engineers had pinpointed a stretch of land where they would build a grand boulevard. But a 7,600-ton apartment building blocked the path. Instead of demolishing the nearly 330-foot- long building, planners decided to move it — with the residents of its 80 units still inside.

In May 1987, workers cut the building in half and dug underneath each side to install a supportive framework. Then, they used hydraulic jacks to lift the building off its foundation so a temporary railway and wheeled platforms could be placed underneath. The two halves were slid 180 feet apart on the rails, with the building’s utility lines staying connected throughout the six-hour moving process. According to local lore, residents of the building watched the move from their balconies, where one woman set down a glass of water that stayed perfectly balanced during the relocation.

The project’s head engineer, Eugeniu Iordăchescu, is known for using a similar system of rails to save a dozen churches from destruction during Romania’s communist era.

Construction of the Aswan High Dam in Egypt in the 1960s threatened to submerge a 13th-century B.C. complex of temples, including giant statues of Pharaoh Ramses II. An international group of preservationists, led by the United Nations Educational, Scientific and Cultural Organization (UNESCO), rallied to help the government avert the potential loss of heritage.

To protect the archaeological site, known as Abu Simbel, a team would move it up and away from where the waters would rise. Work crews cut the two temples into more than 1,000 blocks that weighed up to 30 tons each that were lifted out by cranes and reassembled over a four-year period. The successful completion of the project in 1968 inspired UNESCO to create its list of World Heritage Sites. More than 1,000 places of cultural and natural importance designated as worthy of protection have now been enshrined on the list.

The statue of Ramses the Great at the Great Temple of Abu Simbel being reassembled after being moved in 1967 to save it from flooding. (Credit: Wikimedia Commons)
1 free article left
Want More? Get unlimited access for as low as $1.99/month
Subscribe