Saturn's moon Enceladus has a pole covered in stripes. Why are they only found in the South Pole and what does that mean for the potential liquid water ocean under its icy crust? 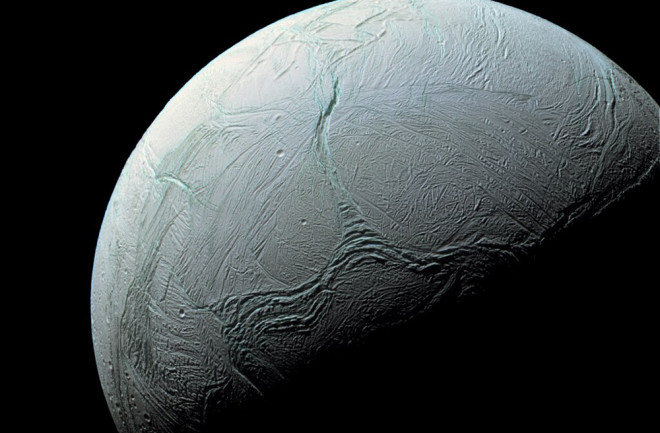 A view of Enceladus, the moon of Saturn, taken by Cassini. Credit: NASA/JPL

Few moons in the solar system engender so much excitement as Saturn’s tiny Enceladus. It likely harbors a liquid water ocean beneath a crust of ice. That crust isn’t thick enough in some places to completely seal away that liquid and jets of ice were spotted by NASA’s Cassini orbiter during its tenure spinning around Saturn. Enceladus' icy crust isn't the same across the whole moon, either. The southern polar region is covered in cracks dubbed "tiger stripes" and appears much younger than the rest of the moon. What causes this stark difference across such a small object?

Combine these numbers with the fact that Saturn is 95 times more massive than Earth, we can begin to realize how much tiny Enceladus feels as it zips around the gas giant planet in a mere ~33 hours!

That means that Enceladus feels a lot of stress. As the moon orbits, it is distorted by Saturn's massive gravity. All this squeezing heats up the rocky interior of Enceladus, so that icy crust heats up too through tidal heating ... which then melts it into the liquid water ocean.

A funny thing happens at that point. The ice crust will start to separate from the rocky core thanks to that liquid water layer. So, it will deform differently than the interior of the moon. So, what impact does that all have on the surface of Enceladus?

In a new study by Alyssa Rhoden (Southwest Research Institute) and others published in Earth & Planetary Science Letters tackles the unique icy surface of Enceladus. They use the observations made by the Cassini orbiter as evidence that the ice crust on this moon differs from the poles to the equator and it is this thickness that leads to the different tectonic activity from south to north.

A close up of the Sulci (or tiger stripes) in the southern polar region of Enceladus, taken by Cassini. Credit: NASA/JPL.

The questions become why it is only the southern region? The answer might lie in ice thickness. All that tidal stress Enceladus feels is felt in the ice shell as well. If at one point the little moon's icy shell was totally frozen, then the dissipation of the tidal stresses would be concentrated at the equator. Over time, those stresses would heat in the interior making pockets of liquid water. Connect those pockets and you might eventually get a global liquid ocean.

This is when things change. A global ocean means the icy shell and rocky interior are no longer in contact. That changes how the tidal stresses are distributed, leading to the highest heating at the poles and lowest at the equator.

This still doesn't explain why the southern pole is more active. This new regime would lead to thinner ice at the poles, with the thinnest ice in the southern pole, possibly 6 miles (10 kilometers) thinner. In Rhoden's models, when the ice is old and cold, the stress caused by zipping around Saturn can be accommodated.

Jets of water ice from the surface of Enceladus, seen by Cassini. Credit: NASA/JPL.

However, make the ice shell thinner — maybe 0.3 to 3 miles (0.5 to 5 kilometers) thick — and that ice can't take the stress without deforming and cracking. This could be what leads to the tiger stripes, and Rhoden's models explain the location and orientation of these stripes across the entire moon.

The Alexandria, Baghdad, Cairo, and Damascus Sulcus (the technical term for the tiger stripes) are the sources of the ice and water jets seen by Cassini (see above). That could be explained by liquid from the sub-ice ocean squeezing through these cracks as the ice shell feels the "tides" of Enceladus' orbit. This tidal stress is what causes Enceladus to have active "ice tectonics," especially focussed on that southern pole.

We might have to wait to unlock more of the secret's of Enceladus. Two proposed missions to visit the moon were passed over during the last round of selection for a New Frontiers mission. Instead, NASA will head to Enceladus' neighbor Titan with the Dragonfly mission in 2026. Saturn beckons, but Enceladus will remain a tantalizing target in the middle of the century.