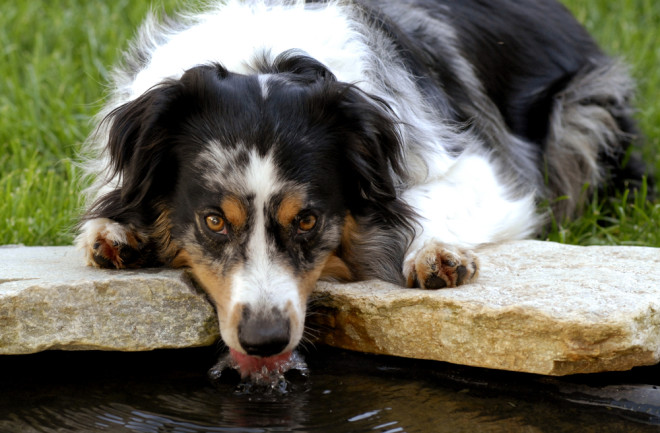 It doesn't take scientific observation to know that dogs aren't the most graceful of drinkers. Blame it on their cheeks: dogs have what are called "incomplete cheeks," which allow them to open their mouths wide but, conversely, means they can't create suction like humans do when drinking through a straw.

So how do they manage to get a drink? A new study uses high-speed cameras to watch the mechanics of a dog lapping water to reveal the physics tricks at play.

The work follows in the footsteps of a 2010 experiment, when scientists from Princeton University and Massachusetts Institute of Technology studied how cats drink using slow-motion video.

Cats, they found, gently touch their tongues to the surface of the water and pull them back rapidly to create a column of water. Just before the water column falls back into the bowl, they snap their mouths closed over it and swallow. Of course, just as you would expect from a cat, there’s not a single splash or crash throughout the entire process.

The study on cats inspired Sunny Jung, an assistant professor at Virginia Tech, to examine the drinking methods of dogs. Going into the research, he and his team didn’t expect to see much of a difference between feline and canine drinking techniques. They were wrong.

Researchers set up several high-speed cameras in a water bowl and paraded in thirsty dogs to see how they drank. While cats gently touch the water’s surface without penetrating it, dogs slam their tongues deep into their water bowl. Unlike cats, they found, dogs curve their tongues backwards in a ladle-shape to snatch a little more liquid from each tongue dunk.

When they rip their tongues out of the water, they cause a significant amount of acceleration — about five times that of gravity. A water column floats into the air, and the dog chomps down to catch the water. And bigger dogs do, empirically, splash more: Researchers also found that bigger dogs make greater tongue contact with the water's surface than do small dogs. The researchers presented their findings Monday at a meeting of the American Physical Society in San Francisco.

To collect more precise data, researchers simulated a dog's tongue by using glass tube. This allowed them to mimic the acceleration and column-formation in a controlled environment, and alter parameters to see how they affected this tongue-dipping ability.

They then measured the volume of water withdrawn with each dip of the glass tube. They found that the column of water pinches off and detaches from the water bath primarily due to gravity. When a dog gets thirsty, it’s not pretty. However, it gets the job done. And if a little gets splashed on the floor — well, the cat will come along to lap it up.