How did the Elephant Skin get its Cracks? New Research Has an Answer 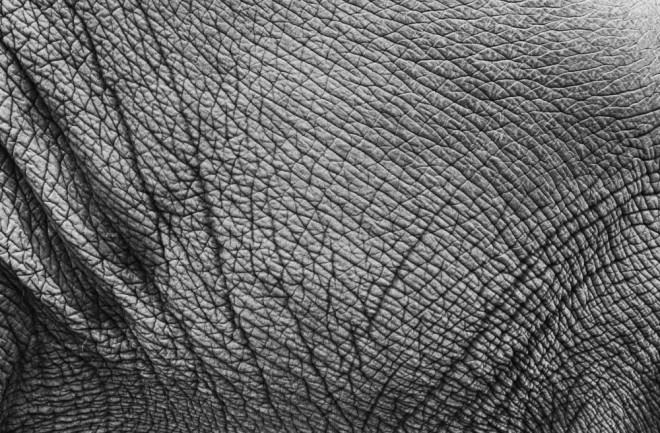 New research digs into the science of how cracks form on an elephant's skin. (Credit: Studi8Neosiam/shutterstock) An intricate web of cracks adorns the wrinkly, gray skin of Africa’s bush elephants. The tiny crevices hold water, which helps keep the animals cool and prevents dehydration in their dry habitat. Now, scientists have figured out how the channels on African elephants’ skin form — the outermost layer of skin gets thicker and bends until the brittle material fractures from the strain. The discovery may provide insight to a common genetic disorder in humans.

Michel Milinkovitch, an evolutionary biologist and biophysicist at the University of Geneva in Switzerland, has a keen interest in how physical processes shape animal traits. In 2013, he and his colleagues discovered that the scales on the faces and jaws of crocodiles are not genetic. Instead, crocodilian skin folds and the cracks propagate in the same way cracks form and spread in cooling mud or drying porcelain. Milinkovitch wanted to know if a similar process made the channels on elephants’ skin. When the researchers examined elephant skin under powerful microscopes, they found that unlike crocodiles, elephant skin actually cracks. The outermost layer of skin—called the stratum corneum—is likely a single, continuous layer stretched over the stratum basale, a deeper layer of skin that ripples with bumps that create miniature ridges and valleys. In the elephant’s skin, fissures had formed where the stratum corneum dipped into the deeper layer's troughs. The researchers noticed that the cracking pattern on the elephant’s skin bore a striking resemblance to cracks that occur all over the planet from what scientists call tensile stress. This kind of stress causes the cracks in damaged asphalt, Earth’s polar landscapes and geological formations, like the basalt columns of the Giant’s Causeway in Northern Ireland. The team thought the same kinds of forces — the shrinking of material on an intricate surface of peaks and valleys — was at work on the elephant’s skin. “We were really convinced that the pattern would be easily explained,” said Milinkovitch. But, “we were wrong.”

To find out how the cracks form, the team used CT scans to build a model of growing elephant skin. Their simulation revealed that cracks formed just by shrinking didn’t explain the cracks they saw on the elephants’ skin. Instead the team found that as the skin thickens, the new sheets of skin growing from the deeper layers bend the overlying layers. The stress of bending causes the skin to crack, they report today in the journal Nature Communications. Now, Milinkovitch has other questions on his mind. He would like to follow how African elephants’ cracks form during growth, since baby African elephant skin is smooth and free of cracks. “Are the cracks appearing everywhere, or do they appear in a specific place and then propagate? Does it take a week or six months?” he said. The researchers’ findings might help establish a link between African elephants’ cracked skin and the dry, scaly skin of people with ichthyosis vulgaris, a genetic skin condition that affects 1 in 250 people. It's possible that similar mutations led to adaptations that are beneficial to elephants yet unfavorable to humans. But Milinkovitch says detailed comparisons are needed to validate the connection.