How Did LEGO Become More About Limits Than Possibilities? 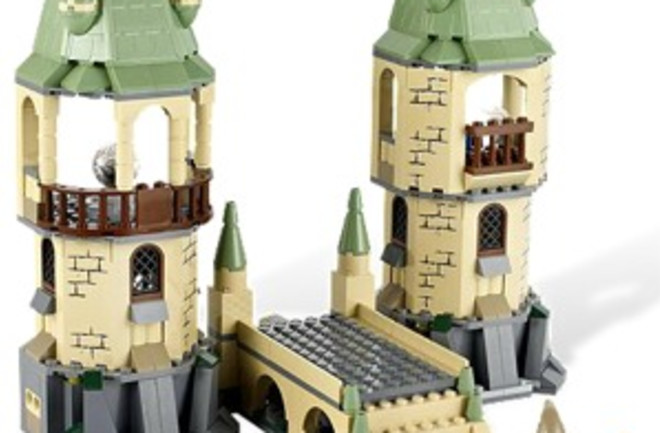 No matter what you do with it, it'll still look like Hogwarts.

Rip open that new LEGO set and your mind races at the possibilities! A simple repertoire of piece types, and yet you can build a ninja boat, a three-wheeled race car, a pineapple pizza, a spotted lion… The possibilities are limited only by your creativity and imagination. “Combine and create!”—that was the implicit war cry for LEGOs.

So how, I wonder, did LEGO so severely lose its way? LEGO now fills the niche that model airplanes once did when I was a kid, an activity whose motto would be better described as “Follow the instructions!” The sets kids receive as gifts today are replete with made-to-order piece types special to each set, useful in one particular spot, and often useless elsewhere. And the sets are designed for constructing some particular thing (a Geonosian Starfighter, a Triceratops Trapper, etc.), and you—the parent—can look forward to spending hours helping them through the thorough yet thoroughly exhausting pages.

LEGO appears to be doing very well for itself, and there’s no shame in helping to revolutionize model-building (and there’s an elegance to snapping together one’s models rather than gluing them together). But one has to wonder whether, at some deep philosophical level, the new LEGOs really are LEGOs at all, as they’re no longer the paragon of creative construction they once were and with which they’re still associated.

In fact, as I was bemoaning my kids’ LEGOs with The Telegraph's* Roger Highfield (and later with WIRED's Samuel Arbesman), it struck me that I have such data on LEGOs.

In earlier research I set out to measure how division of labor (number of types of component) in complex networks varies with network size. I looked at a wide variety of networks, including bodies (networks of cells), brains (networks of neurons), ant colonies (networks of ants), businesses and tribes (networks of people), electronic circuits (networks of electronic components) and…LEGOs. My takeaway messages from the journal article concerned the sorts of laws governing how network differentiation varies with network size. In every case, division of labor rises as a power law with network size, and from this one can infer how combinatorially the network components are used—that is, to what degree the network's properties come not from the properties of the individual components, but from the clever combinations. I found salient differences between biological networks (bodies, brains, ant colonies) and human-built ones (tribes, businesses, circuits, LEGOs): The biological networks were much more combinatorial, using clever combinations of simple components to do complicated functions.

In light of the issue of what has become of LEGO, I looked back at my old data and was surprised to find that among all my human-created networks, the degree of combinatorial exploitation for LEGOs was the lowest of any category from which I collected data—so low, in fact, it was nearly not combinatorial at all. For LEGOs, the number of piece types increases more quickly as a function of network size than any of the other network categories, and this is the signature of a network that is not using its components very combinatorially.

To give some numbers, the “degree of combinatorialness” values (where higher means greater combinatorial exploitation, and roughly says the number of degrees of freedom involved in building something out of the parts) for the biological networks were as follows: bodies, 17.7; brains, 4.6; ant colonies, 8.1. For the human-built networks they were: businesses and tribes, 2-ish; electronic circuits, 2.3; LEGOs, 1.4.

LEGOs came in dead last among the complex networks I happened to look at. When they double the size and complexity of the thing built, they nearly double the number of special piece types needed for that thing. I suspect that the number of piece types would rise much more slowly than this were we to look at the LEGO sets of the 1970s and 80s.

These numbers support what users of old-school LEGOs intuitively feel: that LEGO is no longer the free-formed “clay” it once was, and more like a model set with pre-formed uses—hello, Geonosian Starfighter!—and also pre-formed limits.

Mark Changizi is an evolutionary neurobiologist and director of human cognition at 2AI Labs. He is the author of The Brain from 25,000 Feet,The Vision Revolution, and his newest book, Harnessed: How Language and Music Mimicked Nature and Transformed Ape to Man."

Correction, February 3, 2012: Due to an editing error, the article originally referred to The Telegraph as The Guardian