How Did Dinosaurs Get So Big? Maybe Because They Were Couch Potatoes 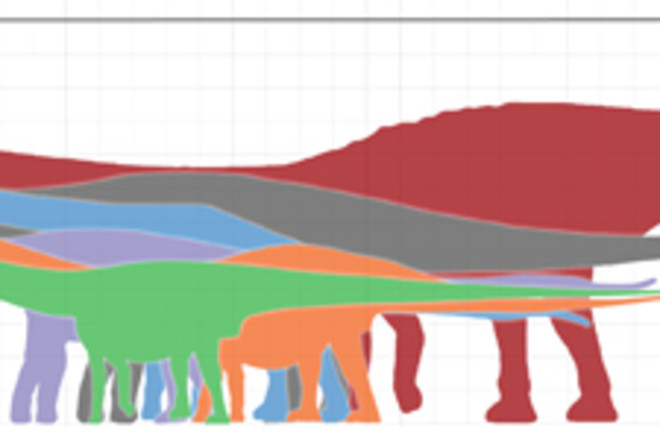 Dinosaurs are objects of eternal fascination to we puny humans because of their sheer size. Some, like the long-necked sauropods, are thought to have had eight times the mass of an African elephant, the largest modern land animal. Now a new model from zoologist Brian McNab suggests that the secret of dinosaurs' size was really quite simple: They had plenty to eat, and didn't have to expend much energy in their daily lives. Says McNab:

"Like couch potatoes sitting within easy reach of high calorie foods, the gargantuan size of dinosaurs most likely stems from the abundance of resources available, coupled with low energy expenditures" [Telegraph].

McNab's findings also contribute to the long-running debate between paleontologists about whether dinosaurs were warm-blooded or cold-blooded creatures. Warm-blooded animals like mammals and birds have to eat a lot more; they

expend energy to keep their internal body temperatures constant, and so they have a high metabolic rate. But cold-blooded creatures such as reptiles rely on their environment for body heat, and their internal temperature fluctuates depending on the surrounding conditions [LiveScience].

McNab argues that dinosaurs could only have gotten so big if they didn't have to expend energy on maintaining body temperature as warm-blooded creatures do, and could devote their energy to facilitating growth. In the study, published in the Proceedings of the National Academy of Sciences, McNab argues that

dinosaurs were "homeothermic," somewhere in between warm and cold-blooded. They did not have a high metabolic rate, but their internal temperature did not fluctuate like that of cold-blooded creatures. Instead, their sheer size kept their body temperature constant. "When you’re that big, you can’t cool off rapidly like a small lizard will," said McNab. "You have a large volume, and you have comparatively small surface area. And so if you’re warm, you’re going to stay warm, unless something unforeseen happens" [LiveScience].

Related Content: 80beats: Duck-Billed Dinosaur’s Shifting Teeth Were Like a “Cranial Cuisinart” 80beats: The “Ultimate Jurassic Predator” Could Crush a Hummer in Its Jaws 80beats: How Did the Giant Flying Reptiles of the Jurassic Period Take Off?Image: Wikimedia Commons