How Citizen Scientists Uncovered the Strange Behavior of ‘Vampire’ Butterflies

In the forests of Indonesia, citizen scientists discover an unsettling revelation about butterflies. 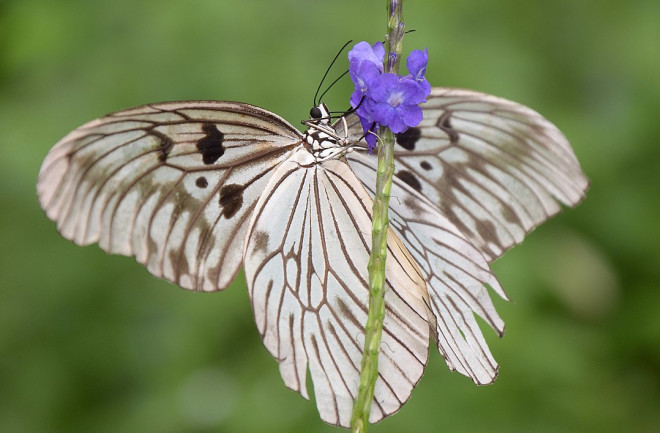 An Idea blanchardii, or Blanchard’s Ghost, butterfly photographed in North Sulawesi in Indonesia. This species was among those citizen scientist found attacking and feeding on caterpillars. (Credit: Ariefrahman/Wikipedia)

When a group of friends met up in the tropical forests of Indonesia, they were expecting to take in the verdant surroundings and hopefully nab a few photos of the colorful butterflies that congregate in the area. That’s what Yi-Kai Tea and his buddies found on the island of Sulawesi, nestled in the midst of the Pacific archipelago. But looking through their photographs later, they noticed something odd about the swarms of vibrant milkweed butterflies they had found.

Hiding in the midst of the lepidopteran bustle was a strange, unsettling and wholly unexpected discovery. In the photos, butterflies and caterpillars share branches of the same plants, jostling for space in the foliage. But the butterflies weren’t just hanging out with their younger compatriots — they were feeding on them. Their images show adult milkweed butterflies tearing into the thin skin of nearby caterpillars, then drinking from the wounds.

This kind of butterfly vampirism was a wholly new observation, says Tea. He studies coral reef fish in his day job as a research associate at the Australian Museum Research Institute and PhD candidate at the University of Sydney. Tea is also a passionate amateur naturalist, and he loves finding and photographing butterflies.

Milkweed butterflies, a family that includes the iconic monarch, are known to scratch at and drink from plants that contain chemical compounds necessary for their survival. But butterflies feeding on living creatures, not to mention caterpillars from closely-related species, was something surprising.

When Tea and his friends returned home, they took a closer look at the rest of their photos. Far from being an isolated incident, they found butterflies attacking and imbibing from caterpillars in photograph after photograph. All told, they found seven species of milkweed butterfly going after caterpillars from a few different species in the milkweed butterfly family. Their find was significant enough that they partnered with two other naturalists to document their find in a scientific paper, published in September in the journal Ecology.

In the paper, Tea and his co-authors suggest a name for the behavior: kleptopharmacophagy. “Klepto” means “to steal” from the ancient Greek, while pharmacophagy is a term for when animals eat things for their chemical contents, rather than for nutrition.

An image from the study showing a Parantica cleona luciplena butterfly feeding on a live Idea blanchardii caterpillar. (Credit: Ecology)

The butterflies were most likely after compounds known as pyrrolizidine alkaloids, made originally by plants. The toxic chemicals are a dietary staple for caterpillars and butterflies alike, giving them an important chemical defence against predators.

“This is why milkweed butterflies (like the monarch) are so colourful, yet fly in such a nonchalant devil-may-care manner,” Tea says. “They rely on these toxins for protection, and advertise them with their warning colors.”

Adult male butterflies also use the alkaloids to make pheromones, which are chemicals they emit to attract mates. It makes the chemicals a valuable resource in the butterfly world. “It’s not uncommon to find hundreds of male milkweed butterflies congregating around alkaloid-containing plants to get at these chemicals,” Tea says.

But caterpillars might be an even better source of the chemicals, Tea and his co-authors think. “Caterpillars, particularly milkweed caterpillars, are just bags of macerated leaves — in this case, the same leaves that contain the alkaloids the butterflies seek,” he says. Combined with the caterpillars’ thin skin, it could make them a tempting target for milkweed butterflies in search of an alkaloid boost.

After searching through old image archives from other naturalists, as well as butterfly images from the citizen science project iNaturalist, Tea and his colleagues even found a recording of an adult butterfly attacking another adult, slashing at and drinking from its wings.

“It’s a highly perplexing interaction,” Tea says, and one that “doesn’t quite fit neatly into traditional modes of biological interactions too, in particular, predation and parasitism.”

The next step, he says, is to do more rigorous studies of the behavior. Their study was descriptive, meaning they found lots of examples, but they didn’t actually test whether the butterflies were actually drinking alkaloids from the caterpillars, among other things.

“All of this needs to be tested and verified, and since we did not collect any specimens, we were unable to do so,” Tea says.

Finding more examples of kleptopharmacophagy would help, too. And they may already be out there.

“I think as with most things, people may just not be looking out for it,” Tea says. “Just because we haven’t found it before doesn’t mean it hasn’t been happening for a long time, in multiple other places.”

It’s also a gap that citizen scientists are ideally situated to help address.

“Citizen science has a huge part to play here, as people are constantly out and about photographing things,” Tea says. “The best way for studies like this to progress is for more people to upload their observations, especially on public platforms like iNaturalist where scientists and researchers can access.”

Want to help find more examples of kleptopharmacophagy, or record your nature sightings? Get started with iNaturalist, which is a SciStarter Affiliate project. You’ll get credit in your SciStarter Dashboard for participating, too.

Click the Visit button on the iNaturalist page. You will be directed to the project’s website or app and invited to create a project account there. Use the same email address (case sensitive!) you used to create your SciStarter account to join this project.

Come back to SciStarter Dashboard and navigate to Info&Settings. Scroll down and enter your iNaturalist user name (case sensitive) in the section titled “Affiliation Integration.”