How can you tell if a rat is smiling? 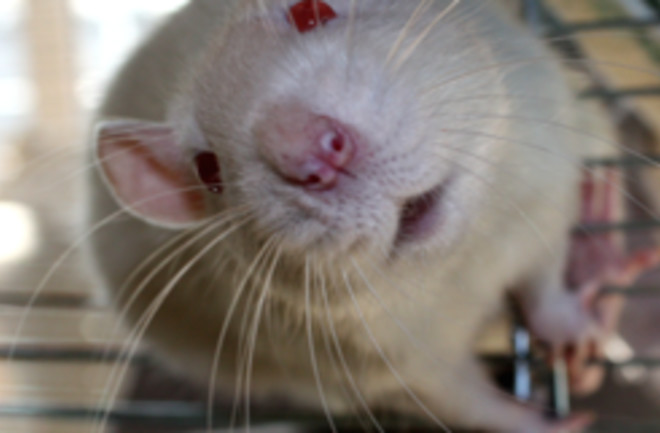 Image: Flickr/AnvisualsWhat does a rat "smile" look like, you ask? Well, these scientists asked the same question, and answered it by taking pictures of rats being tickled, and comparing the images of happy rats to those taken while blasting them with white noise. It turns out that the rat equivalent of a happy grin is slightly pinker, and more relaxed ears. How cute is that?Facial Indicators of Positive Emotions in Rats. "Until recently, research in animal welfare science has mainly focused on negative experiences like pain and suffering, often neglecting the importance of assessing and promoting positive experiences. In rodents, specific facial expressions have been found to occur in situations thought to induce negatively valenced emotional states (e.g., pain, aggression and fear), but none have yet been identified for positive states. Thus, this study aimed to investigate if facial expressions indicative of positive emotional state are exhibited in rats. Adolescent male Lister Hooded rats (Rattus norvegicus, N = 15) were individually subjected to a Positive and a mildly aversive Contrast Treatment over two consecutive days in order to induce contrasting emotional states and to detect differences in facial expression. The Positive Treatment consisted of playful manual tickling administered by the experimenter, while the Contrast Treatment consisted of exposure to a novel test room with intermittent bursts of white noise. The number of positive ultrasonic vocalisations was greater in the Positive Treatment compared to the Contrast Treatment, indicating the experience of differentially valenced states in the two treatments. The main findings were that Ear Colour became significantly pinker and Ear Angle was wider (ears more relaxed) in the Positive Treatment compared to the Contrast Treatment. All other quantitative and qualitative measures of facial expression, which included Eyeball height to width Ratio, Eyebrow height to width Ratio, Eyebrow Angle, visibility of the Nictitating Membrane, and the established Rat Grimace Scale, did not show differences between treatments. This study contributes to the exploration of positive emotional states, and thus good welfare, in rats as it identified the first facial indicators of positive emotions following a positive heterospecific play treatment. Furthermore, it provides improvements to the photography technique and image analysis for the detection of fine differences in facial expression, and also adds to the refinement of the tickling procedure." Related content: Laughing rats are optimistic.Binge drinking: also a problem for our teenage rats.Do the mystical healing powers of pyramids apply to rats?