How Bioluminescent Fungi Glow In the Dark 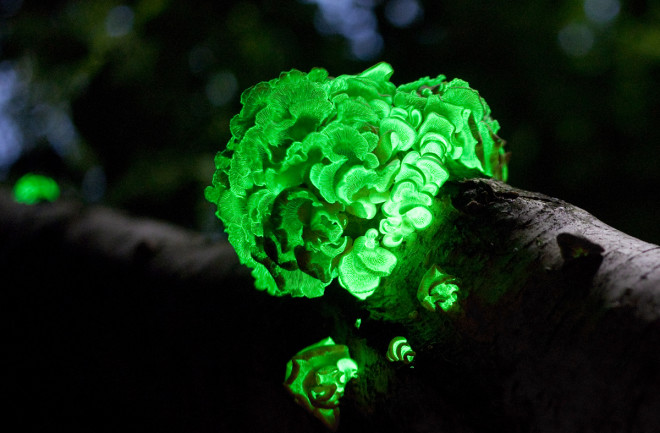 Take a moonlit walk through the woods, and you may notice small, glowing green mushrooms brightening your path near the bases of trees and in the underbrush. There are roughly 80 species of bioluminescent fungi scattered throughout the world, and 2015 study indicated they likely glow in the dark to attract spore-spreading bugs.

But how they do it has been unclear, and a new study published Wednesday in the journal Science Advances indicates that, when it comes to lighting up the night, glowing mushrooms resort to the same tricks as fireflies and anglerfish — animals that inhabit an entirely different taxonomic domain.

Bioluminescence is everywhere in nature — species of phytoplankton, disturbed by propellers, glowing in the wake of passing ships at sea is a common example, but just one of many. Fish, squid, bacteria, worms, fireflies and a host of other animals produce their own light, and the reasons they do it — from defense to attracting a mate — are just as varied.

Now, through a chemical analysis, an international team of researchers isolated a chain of chemical reactions that it believes makes these mushrooms shine. The glow is the result of an interaction between a compound called luciferin and the luciferase enzyme in the presence of oxygen, they say.

If their glow appears familiar to you, that may be because other organisms use the same compound to produce light as well. Fireflies and anglerfish number among the species that rely on these compounds for light.

They examined the mushrooms with an array of techniques, including mass spectrometry and chromatography, and say the light comes when the product of this reaction, oxyluciferin, releases an oxygen molecule and returns to its ground state, thereby giving off energy in the form of light.

They published their findings Wednesday in the journal Science Advances.

While the mushrooms normally appear green, the researchers could produce different colors by reacting different compounds with luciferase. Building a complete picture of how things naturally glow in the dark can aid genetics researchers, who use genes encoding for bioluminescence in their research.