How bats find water and why metal confuses them 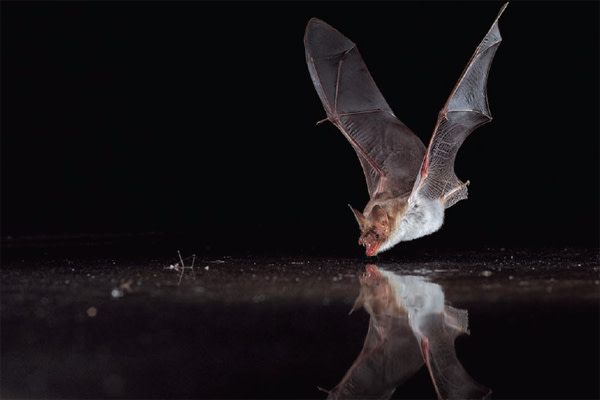 A bat, flying through the night sky, is thirsty. As it flies, it sends out high-pitched squeaks and listens for the returning echoes. It hears a telltale pattern. It hears no echoes form up ahead and the only ones that reflect back at it are coming from straight below. That only happens when the bat flies over a flat, smooth surface like the top of a lake or pond. The bat dives, opens its mouth to take a sip of refreshing water... and gets a mouthful of metal. In nature, bodies of water are the only large, smooth surfaces around. Waves of sound that hit the surface of still water would generally bounce away, except for those aimed straight downwards. Stefan Greif and Björn Siemers from the Max Planck Institute for Ornithology have found that bats are instinctively tuned to find water using this unique feature (and yes, the institute does mostly, but not exclusively, bird research).

The man-made world is full of surfaces with the same properties, including metal, plastic and varnished wood. When Greif and Siemers released bats over smooth plates made of these materials, the animals tried to drink from them. If the plates were textured with small ridges, the bats ignored them. This instinct seems common to echolocating bats, for Greif and Siemers tested 15 different species with varied lifestyles and distantly related families. All of them did the same thing. Bats don’t need to learn this skill; it appears to be innate. Greif and Siemers captured six young Geoffrey’s bats from a cave near their research station and raised them in captivity. At the time of capture, they hadn’t yet taken their first flight and they had never encountered a pond or river. But despite their naivety, as soon as they could fly, five of them tried to drink from a smooth, metal plate (but not a textured one) in the same way that adults do. This drive to drink from smooth-sounding surfaces is so strong that bats will ignore other cues to the materials’ identity, including the fact that they look, smell and feel different. Every single adult bat involved in the study did the same thing and some tried their luck a hundred times or more. Even individuals that had accidentally landed on the plates would try to drink from them later, despite their first-hand evidence that the surface couldn’t possibly be made of water. When Greif and Siemers placed a metal plate on a table, so that the bats could echolocate underneath it (and even fly underneath it), they still tried to drink from it. The echo patterns don’t completely override information from the other senses though; they just dominate them. When the bats were tested in complete darkness (rather than the dim red light that shone in most of the trials), their number of drinking attempts went up by 60%. Robbed of sight, they’re more likely to mistake metal for water. The study shows just how important echolocation is for bats that use it, but it also raises some worrying concerns. If bats can be fooled by plates just 2 square metres in area, they might also try to drink from other large man-made smooth surfaces, like the roofs of cars. It will be interesting to see whether they do this, how often it happens and whether it causes them any harm (either by direct injury, or by depriving them of an actual drink). Reference: Nature Communications http://dx.doi.org/10.1038/ncomms1110More amazing bats: