For the first time, scientists have recorded and visualised the internal structure of living cities made by army ants 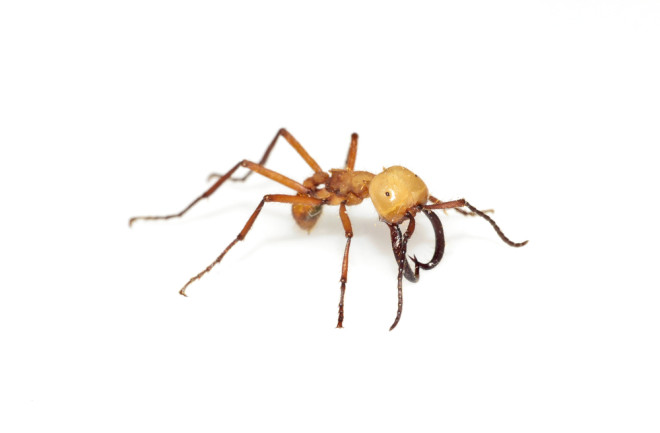 Eciton army ants are so named because of their military-like foraging tactics in which vast numbers simultaneously swarm over an area the size of a football pitch, ruthlessly devouring their prey, mainly other ant species and wasps. The thoroughness of these “raids” prevents army ant colonies returning to the same area. So the colonies — some 200,000 individuals — must be constantly on the move.

That raises the problem of where to nest and army ants have come up with a unique solution. They use their own bodies to create complex nests called bivouacs, large conical structures that hang from trees or sit inside rotten logs. Every 20 days or so they up and move to a new location, reforming their nest when they get there.

Bivouac construction is an extraordinary example of self-assembly. Inside them, the colony protects its queen, cultivates eggs and allows larvae to hatch. This requires specific temperatures and humidity, which the ants control by opening and closing air vents. These complex structures are like living, breathing cities.

But the structure of these bivouacs, and how ants form them, is poorly understood, not least because army ants react fiercely to any external disruption.

Which is why the work of Thomas Bochynek at Northwestern University in Illinois and colleagues is so exciting. This group has created an artificial environment in which army ants can build bivouacs while an x-ray scanner captures the internal structure of the resulting nest. The outcome is a fascinating visualization of army ant nests and a unique insight into the behaviour behind such complex self-assembly.

The team’s experimental chamber is a Perspex cylinder sealed at the top with a corkboard that the ants can hang from. The Perspex cylinder sits inside an X-ray scanner which takes a series of images of the nest from different angles to build up a three-dimensional picture of the bivouac structure.

All this is set up inside a field lab in a tropical forest on Barro Colorado Island, that sits in the Panama Canal in central America. Here, Eciton army ants are relatively easy to find.

Bochynek and co begin their experiment by gathering some 50,000 ants from the nearby forest using a modified vacuum cleaner. They then release the ants into the experimental chamber and record what happens.

When the bivouac is fully formed and the recording has ended, the team remove the ants using the vacuum cleaner and release them again into the chamber where the nest-building process begins all over again. At the end of the experiment, the ants are released back into the forest.

In total, the team collected five different colonies and recorded the formation of 25 different bivouacs.

This gave them an unprecedented insight into the way bivouacs form. “We show that bivouacs are heterogeneous structures, which throughout their growth maintain a thick shell surrounding a less dense interior that contains empty spaces akin to nest chambers,” say Bochynek and co.

All this happens with the bivouac in a state of constant flux with individuals moving in and out of the structure. Indeed, Bochynek and co think of it as a superorganism itself.

Knowing the 3D structure allowed the team to calculate the stresses that each ant must experience in the bivouac. “We find that ants within the bivouac do not carry more than approximately eight times their weight regardless of the size of the structure or their position within it,” they say.

What’s more, it’s easy to imagine that ants near the top of the structure have to deal with greater forces than those elsewhere in the bivouac; but not so. The team say that these stresses are divided more or less evenly between the individuals, regardless of their position within the structure.

Bochynek and co hypothesise that if this kind of sharing is maintained as the nest gets bigger, the size of bivouac structures has no theoretical upper limit.

Exactly how each ant knows what to do to maintain this structure is not yet clear. But Bochynek and co are confident that their approach will allow a more detailed study of ant behaviour that should tease apart the basic rules of self-assembly.

With that knowledge could come the ability to create robotic systems that can artificially self-assemble. These kinds of synthetic swarms might one day be able to repair roads and bridges, for example, or carry out more advanced activities.

For the moment, though, there is much more to learn from Panamanian army ants using this fascinating new method of visualising the structures they create.