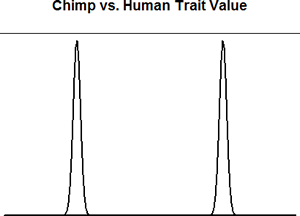 Last August I had a post up, The point mutation which made humanity, which suggested that it may be wrong to conceive of the difference between Neanderthals and the African humans which absorbed and replaced them ~35,000 years ago as a matter of extreme differences at specific genes. I was prompted to this line of thinking by Svante Pääbo's admission that he and his colleagues were searching for locations in the modern human genome which differed a great deal from Neanderthals as a way through which we might understand what makes us distinctively human. This sort of method has a long pedigree. Much of the past generation of chimpanzee genetics and now genomics has focused on finding the magic essence which differentiates us from our closest living relatives. Because of our perception of massive phenotypic differences between H. sapiens and Pan troglodytes the 95-99% sequence level identity is thought by some to be perplexing. Therefore models have emerged which appeal to gene regulation and expression, or perhaps other forms of variation such as copy number, to clear up how it can be that chimpanzees and humans differ so much. Setting aside that the perception of difference probably has some anthropocentric bias (i.e., would an alien think that chimpanzees and humans are actually surprisingly different in light of their phylogenetic similarities? I'm not so sure), it doesn't seem to be unreasonable on the face of it to plumb the depths of the genomes of hominids so as to ascertain the source of their phenotypic differentiation. But can this model work for differentiating different hominin lineages? Obviously there's going to be a quantitative difference. The separation between chimpanzees and modern humans is on the order of 5 million years. The separation between Neanderthals and modern humans (or at least the African ancestors of modern humans ~50,000 years B.P.) is on the order of 500,000 years. An order of magnitude difference should make us reconsider, I think, the plausibility of fixed differences between two populations explaining phenotypic differences. Backing up for a moment, why do we think there might be fixed differences between Neanderthals and modern humans? The argument, as outlined in books like The Dawn of Human Culture, is that H. sapiens sapiens is a very special lineage, whose protean cultural flexibility allowed it to sweep of the field of all other hominin sister lineages. The likelihood of some admixture from these "dead end" lineages aside, this rough model seems to stand the test of time. Consider that the Mousterian technology persisted for nearly 300,000 years, while the Oldowan persisted for 1 million! In contrast, our own species seems to switch and improve cultural styles much, much, faster. Behavioral modernity does point to a real phenomenon. The hypothesis of many scholars was that there was a genetic difference which allowed for modern humans to manifest language as we understand it in all its diversity and flexibility. The likelihood of this seems lower now that modern humans and Neanderthals have the same variants of FOXP2, the locus which seems to be correlated to elevated vocal and auditory capabilities across many vertebrate lineages. And, if it is correct that ~2.5% or so of modern human ancestry in Eurasia, and nearly ~10% in Papua, comes from "archaic" lineages, then I think that should reduce our estimates of how different these humans were from the Africans. 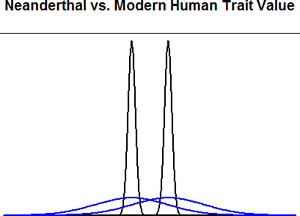 Therefore you can posit two stylized scenarios of contrasts between Neanderthals/modern humans and chimpanzees/modern humans. In one model the difference between the two comparisons is fundamentally of degree. Neanderthals and chimpanzees are still disjoint from modern humans. That is, there's no overlap in the traits. But, Neanderthals are far closer to modern humans, as would be likely expected from the phylogenetic relationship. Another model though is that Neanderthals and modern humans did differ, but there was a great deal of overlap. This is a model with qualitative differences from that of chimpanzees vs. humans. If the second model is correct, and I think with all that we know from the Neanderthal genome project would should take it more seriously, then looking for disjoint pairwise differences in allele frequencies is not the way to go in understanding how the two human lineages diverged in phenotype.

In the second model, where there is a great deal of overlap, there is still a difference in the tails of the distribution. The idea I had in mind with my earlier post was that it is at these tails that the differences between Neanderthals and modern humans will be found when it comes to cultural differences. I think one might wonder where the Michelangelo or a Bachs of the Neanderthals were, but then one has to observe that the vast majority of modern humans are not Michelangelo or a Bachs! One of the primary indications of the transition to behavioral modernity is the proliferation of symbolism. But are we to presume that every member of an ancient Paleolithic tribe was equally capable of creative virtuosity? I think likely not. It could be that in fact the vast majority of "modern humans" are no different from all Neanderthals in the sort of things we might expect to be different across the two lineages. Rather, it may be that a small minority of modern humans crossed a particular threshold at the edge of the distribution of the phenotype, and when that transition was made the world was never the same.

I'm not proposing here that the victory of African humans ~50,000 years ago was due to artists. What I'm proposing is that at some point a critical mass of exceptional individuals arose. These individuals were possessed of peculiar characteristics, but instead of these characteristics making them outcasts, the qualities which they possessed were seen by their fellow humans as marks of greatness. In short, they were the children of gods among men. Or perhaps demons. Men such as Alexander, Napoleon, and Hitler, were possessed of peculiar charisma, but whether they were good or evil is a matter of dispute and perspective. The point is not that they achieved greatness, but that they were the catalysts for a great number of events. As charismatic leaders they took collections of human beings, and turned them to their purpose. Individual humans became more than the sum of their parts, and for moments exhibited almost organismic levels of cohesion. Though the number one predictive variable in who won wars in the pre-modern world is the simple one of numbers, organization and structure also mattered. The Roman legion operating in a Testudo formation

could beat off the attacks of more numerous barbarians who were physically more robust on a per person basis because the unit exhibited synergy, and translated cohesion into efficient collection action. This does not occur bottom up, but requires a personality type, a genius, to serve as the nexus or locus. The model I have in mind then is one where the African humans faced up against their near relations, but not as one against one. Rather, under the guidance of charismatic leaders, Paleolithic megalomaniacs driven by fervid nightmares and irrational dreams, they ground through the many enemies who fought as sums of singulars as a cohesive social machine. It was not because they were superior on a per unit basis, but because they were superior on a per tribe basis, driven by individuals who turned the many to their own ambitions. With the lever of superior social organization the few moved the world, and swept over it. How many insane voyages were their east over the horizon from Sundaland

before one tribe finally made landfall in Sahul

? How many tribes perished in the ice of the far north, before some finally made it to Beringia? Why did humans look over the horizon, and venture out across the black waters? Perhaps just because they could. This answer is likely confusing and disquieting to many alive today, and perhaps it was disquieting to the more reasonable and level-headed "archaics" who were confronted with the zealous organizational insanity of the African humans who were rolling all opposition. But these insane individuals still move among us today, and they are still the objects of curiosity, fear, and adulation. Is this a crazy model? Yes, somewhat. But is it really anymore crazy than the model that there is a mutation which can encapsulate all that differentiates man from beast-man? I think not.