How Ant Slaves Overthrow Their Masters

Despite being an evolutionary dead end, one ant species rebels against the tyranny of another. 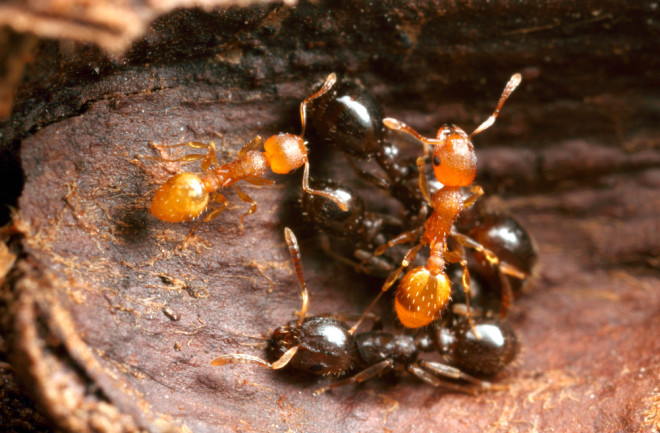 Every summer, a pitched battle of wills unfolds within the acorns and hollowed-out twigs of the Northeastern United States. A dark, bulbous-headed ant called Protomognathus americanus invades these tiny abodes and plucks the pearly brood of ants in the genus Temnothorax.

The pilfered offspring return with the raiders to their nests, then hatch and grow up to become live-in slaves, tasked with the feeding and care of their slothful masters and their masters’ brood.

Because the lives of these ant slaves are so hopeless — they have no chance to reproduce, after all — scientists long assumed they would find no benefit in rebellion. “They are an evolutionary dead end,” explains biologist Tobias Pamminger of the Johannes Gutenberg University of Mainz in Germany.

Which is why Pamminger and his colleagues were puzzled by the insidious ways they saw slaves turning the tables on their masters. The slaves will just stop feeding and cleaning the young ants in their care, leading them to die. Sometimes, a group of slaves will incite an all-out revolt and dismember the young in a gruesome game of tug-of-war. Now, in a multiyear survey across four Northeastern states, Pamminger has found that about 60 percent of the slave-reared brood in the care of the slave species die, compared with just 20 percent of the young in free-living colonies. Rebellion is real.

And this observation squares with evolution after all. While mutinous slaves may not be able to save themselves, by rebelling they can reduce the number of slave masters who prey on nearby relatives. After spending five years working with and studying the “oppressed,” Pamminger says it’s good to know that resistance isn’t futile.