How a pit viper saved millions of lives: Snakes as drug factories 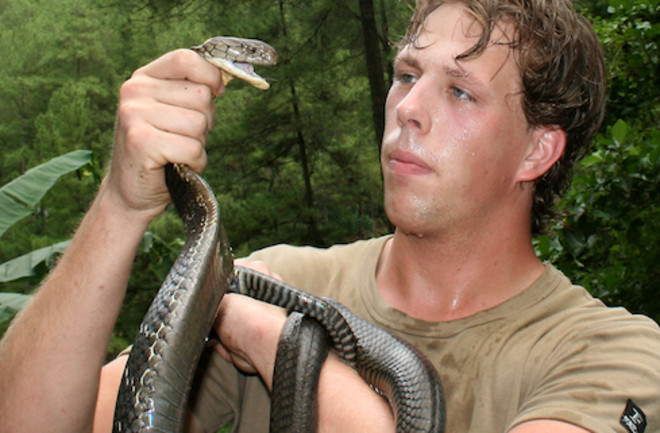 If you've just been bitten by a venomous snake and your flesh is starting to rot and you can't breathe, you may not be in the mood to hear how beautiful snake venom can be. But from a safe distance, it really is a marvel to behold.

Snake venom is a blend of molecules, many of which are exquisitely adapted for wreaking havoc. Some are enzymes that slice muscles apart. Some grab onto proteins that normally form clots, so that a snake's victim can't stop bleeding. Many snake venoms attack the nervous system with molecular precision that's so good that neuroscientists have snakes to thank for some of their biggest discoveries.

In the 1950s, two researchers in Taiwan--CY Lee and CC Chang--decided to study the venom of the banded krait. A bite from the snake, native to Taiwan, caused paralysis and shallow breathing--suggesting to the scientists that the snake's venom must interfere in an interesting way with the nervous system's control of muscles.

Nerves trigger muscles to contract by releasing the neurotransmitter acetylcholine. At first Lee and Chang assumed that the snake venom must cut acetylcholine apart, but they found it had no effect. Instead, they discovered, the banded krait venom prevented neurons from responding to acetylcholine and from releasing their own. These two changes were caused by two different proteins in the venom of the banded krait, which Lee and Chang dubbed α-bungarotoxin and β-bungarotoxin.

In 1970, Lee went to Paris. He wanted to present his results to Jean-Pierre Changeux, a neuroscientist at the Pasteur Institute in Paris who was at the forefront of deciphering the molecular structure of neurons. He was thrilled by Lee and Chang's research, because it looked as if that α-bungarotoxin was latching onto a receptor for acetylcholine. Scientists assumed that such a receptor existed, but no one had found it yet.

Lee collaborated with Changeux and Michiki Kasai to test out the toxin on neurons from electric eels. Just as Changeux had hoped, the krait venom latched onto one receptor in particular. Using the venom as their guide, the scientists could purify a big enough supply of the receptors to figure out its structure--the first time such a feat had ever been accomplished for a receptor on a neuron.

Researchers wondered if the immune system was mistakenly attacking the receptors and destroying them. If that were true, then you'd expect people with myasthenia gravis to have antibodies to the receptors. In 1976, scientists from the Salk Institute mixed together radioactive α-bungarotoxin and acetylcholine receptors and then added them to serum from people with myasthenia gravis. Just as the researchers had predicted, the serum was loaded with antibodies that attacked the receptors. Today, neurologists use α-bungarotoxin to diagnose the disease. There's no point in trying to make a better probe, when snakes have evolved such a good one already.

In a review to be published in the journal Bioessays, Freek Vonk of Leiden University (picture above with a king cobra) and his colleagues describe how venom is continuing to make its way into the clinic. A crucial part of this translation is understanding how snakes evolved such a rich pharmocopeia. By comparing the genes for venom with other genes, scientists have found that they've been borrowed away from other functions. Many animals--ourselves included--make enzymes that attack microbes. In snakes, this molecule evolved into a structure that let it attack muscle. It doesn't attack the snake's own muscles, however, because the gene for it only becomes active in the cells of the snake's venom gland.

This transformation has occurred many times over, and, as Vonk and his colleagues explain, it is made possible by several different kinds of mutations. In some cases, the genes are duplicated, so that one copy can go on doing its original job, while the other is free to evolve to do a beter job at a new one--in this case, killing prey. It's also possible for cells to use one gene to make two different proteins. Genes are made of segments, and cells can use different combinations of segments to make different proteins (a process called alternative splicing). The DNA from gene segments can also get swapped from one venom gene to another, adding new loops and pockets to proteins to give them new opportunities to attack.

This creative evolution didn't just turn non-venom into venom. It also let venom evolve into new forms. Snakes, scientists are finding, often carry venoms fine-tuned for their prey of choice. Some species of saw-scaled vipers make arthropods their prey, while others attack mammals. The venom of the mammal-specialists is useless against arthropods like scorpions.

As a result of this evolution, scientists have lots of different venoms to explore to see if they're useful in medicine. Millions of people rely on venom to keep their blood pressure in check, for example. ACE inhibitors were isolated from Brazilian pitvipers, which use the molecule to make their prey black out from a drop in blood pressure. Saw-scaled vipers make blood-thinning venoms, which have been turned into an anticoagulant drug called tirofiban. A number of venom drugs are now in the pipeline to treat cancer, bacterial infections, and other ailments.

Scientists are developing ways to test out venoms faster. Instead of trying them out on mice, for example, some researchers are figuring out how to inject venom into zebrafish eggs. And Vonk and his colleagues think that there are a vast number of venoms for these scientists to investigate. While scientists have been studying venoms for decades, they've focused their attenion on the ones that are dangerous to humans. Yet most snakes--even seemingly harmless ones without fangs or complicated venom glands--turn out to produce venom. You won't get killed by a garter snake's venom, but it may be enough to slow down a rat that the snake wants to eat. And the molecules made by these "harmless" snakes are just as interesting, chemically speaking, as anything made by a king cobra.

Of course, Vonk and other snake experts won't be able to study those venoms if the snakes become too rare to find. A lot of the habitats where snakes live are under siege, and some preliminary surveys suggest that snakes may be in a worldwide decline. If they go of into that dark night of extinction, they'll take their medicines with them.

(For more on venom, see my articles in the New York Times here and here. And also check out Vonk giving snakes the Steve Irwin treatment )