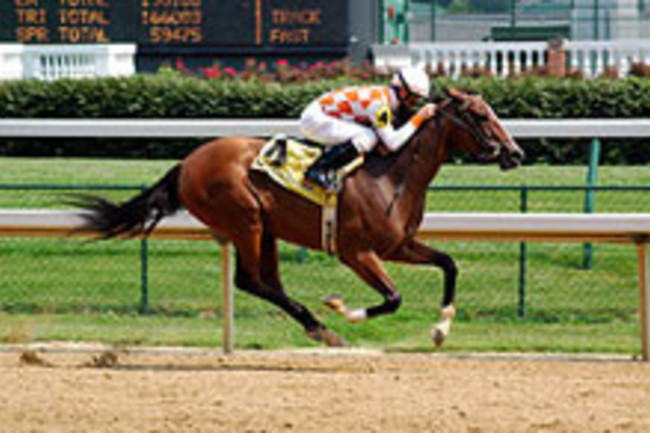 In the past century, jockeys have helped their horses race about six percent faster, thanks to a position on the horse known as the "monkey crouch." This elevated, squatting stance minimizes the work the horse must do to propel his rider forward, according to a study published in Science. To analyze the movement of the horse and jockey while racing, scientists attached sensors to the saddle and the jockey's belt. They found that when a horse runs, it also moves up and down, bringing the jockey along with it. The rider can therefore weigh the horse down or, in the case of the monkey crouch, he can isolate himself from the horse's motions, and therefore minimize his effect on the horse's movement.

When seated upright, riders act much like sandbags, weighing down the horse and incurring increased mechanical and metabolic costs. But in the crouched ... position, a jockey can move relative to the horse and minimize this forward-backward and up-and-down movement [Scientific American].

In fact, the researchers found that the crouch allows the jockey to remain largely unmoving in the vertical direction, even as the horse bobs up and down. Whereas a horse averaged a vertical change of 150 millimeters in each stride, the rider's vertical displacement was only about 60 millimeters..... By, in effect, floating above his mount, the jockey saves the energy the horse would otherwise expend to shove him back up after each bounce down into the saddle

[ScienceNOW Daily News]. The effort it takes for the jockey to brace himself helps explain why a rider's heart rate can reach 190 beats per minute during a race.

The "monkey crouch" got its start more than 100 years ago, when

in 1897, an American jockey named Todd Sloan came to the United Kingdom and revolutionized the world of horse racing. Instead of dangling his legs down the sides of his horse, he squatted high in his stirrups. The British called the awkward-looking position the "monkey crouch," but the new seat quickly caught on [ScienceNOW Daily News]. Since then, horse racing times have dropped by between five and seven percent in the United States and Britain.

Related Content: 80beats: Why a Greyhound or a Racehorse Doesn’t “Pop a Wheelie” 80beats: Lizard Swims Through Sand by Retracting Its Legs & Moving Like a Snake 80beats: Slithering Snakes Reveal the Secret of Limbless Locomotion 80beats: When a Hummingbird Goes Courting, He Moves Faster Than a Fighter Jet Image: flickr / Jeff Kubina

HealthEven If You Don’t Drink Daily, Alcohol Can Mess With Your Brain
Recommendations From Our Store