How a Fungus Makes a Jet Stream to Carry Spores Abroad 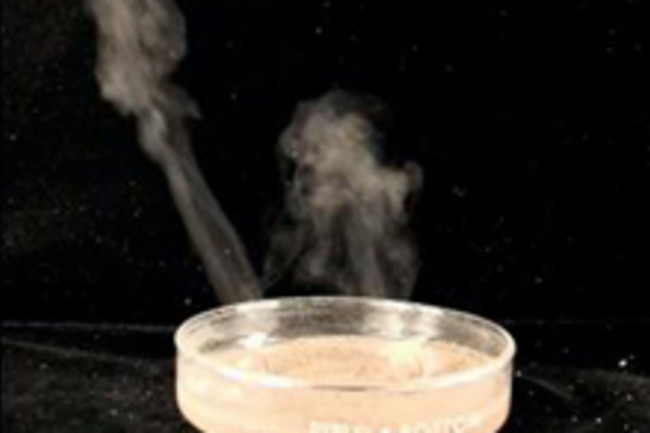 For tiny spores, there's no defeating gravity—unless they work together. The pathogenic fungus Sclerotinia sclerotiorum travels from place to place by shooting its spores up in the air to be carried away, the same way many plants and fungi spread. A single spore, however, can barely get airborne before it falls back to the surface. A species isn't going to spread far with that kind of flight time, but luckily, this fungus has a solution. It blasts its spores en masse, creating a wind current that helps them all drift away to new homes.

The spores initially blasted off at speeds near 20 miles per hour. But the distance they traveled depended on whether they launched alone or en masse. Spores sprung singly were quickly brought down by drag, traveling a mere 3 millimeters before decelerating to zero. But when the fungus ejected waves of spores in quick succession, it created currents that carried spores farther at a slow but steady pace of just over 1 mile per hour. [Science News]

for their study, soon to be published

in the Proceedings of the National Academy of Sciences.

The videos also showed how synchronisation is achieved. An external cue – possibly a drop in air pressure – triggers the ejection of pioneer spores, causing mechanical changes in the surrounding tissue that trigger more ejections. [New Scientist]

It pays to go last: Those spores shoot the highest, riding the established current. However, Roper says, the lovely part is that nearly all the spores fly higher than they would on their own. Call it spore socialism.

"It actually turns out that this particular way of triggering the puff avoids unfair distribution of cooperative benefits." That is, no one spore can cheat the system, and ride the currents created by the others without doing its own part to maximize the distance traveled for all. "What's keeping them from cheating is built into the physics." [The Scientist]

This is just one creative solution to the problem of defeating gravity to spread seed. Check out the story from July about the moss

that creates intense pressure inside the capsules where it keeps its spores. When it finally explodes those spores burst forth in a mushroom cloud, and are lifted high enough for the wind to carry them away. Related Content: 80beats: Moss That Makes Mushroom Clouds: A Plant Explodes to Spread Its Spores