How a 50-Foot-Long Humpback Whale Sneaks Up on Prey

The schools of fish they hunt don't realize the whales are a threat until it's too late. 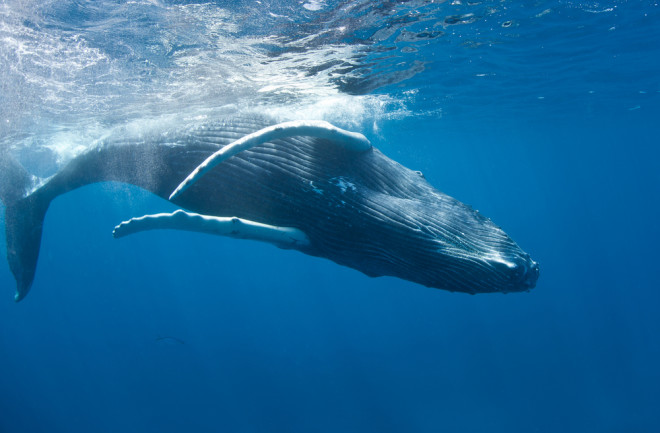 Humpback whales, despite their impressive size, have learned how to sneak up on schools of fish. (Credit: Ethan Daniels/Shutterstock)

It’s hard to imagine a humpback whale being stealthy. The 50-foot mammals hunt fish by cruising through entire schools with their mouths wide open. It's hardly a subtle hunting strategy, but it works well — the fish often don't have time to scatter.

According to new research in the Proceedings of the National Academy of Sciences, the whales might be exploiting an evolutionary blind spot. Their looming shadows simply don't register as a threat until it's too late.

Footage of hunting humpbacks and lab simulations show that if whales keep their mouths closed long enough, they can delay scattering the fish. This allows them to sometimes trap as much as 30 to 60 percent of an entire school in their mouths.

“In the murky ocean, from the fish's perspective, predators are often just threatening shapes in the distance,” says study co-author Nick Carey, a biologist with the Scottish Association for Marine Science, in an email. Anchovies have been learning which shapes to avoid for over 100 million years.

However, whales developed their distinct hunting tactics — gulping water and potential prey and then straining out the unwanted fluid through their baleen — 5 million years ago. To figure out if the whales' relatively new hunting tactics were giving them the edge, Carey and his colleague Dave Cade went to the ocean.

The team started by suction-cupping video cameras and motion sensors to humpbacks hunting around the coast of California. Reviewing that footage let them create computer simulations of an oncoming whale, which they played for anchovies in a lab. By varying the speed of the “oncoming threat” — a black dot expanding on a screen — the team found what triggered fish to flee.

The lab and real-world data showed that anchovies are expecting predators like sea lions. These mammals are smaller, faster and open their mouths just before they snatch a fish. Anchovies wait until sea lions are very close — and loom large in their line of sight — before darting away.

But when the fish wait that long for an impending whale to appear similarly large and threatening, it’s too late. The humpback is already too close, and its massive mouth is widening to scoop up the fish. Indeed, the longer a humpback can hold off opening its mouth, the better luck it'll have.

Humpbacks only have successful hunts if they time their mouth opening correctly, Cade, who worked on the study while at Stanford University, says. Future research might look at how often humpbacks nail this tactic. “Like other species that perform complicated maneuvers that require precise timing, whales likely get better at it with experience,” he says.

Fish aren’t humpbacks' only prey. The whales also go after krill and other tiny organisms they can keep trapped behind their baleen, and Cade says it’s encouraging to see that the species can successfully approach either food source depending on what’s available. Unlike blue whales, which aren’t as flexible when it comes to diet, humpbacks might have a better chance of survival, Cade says.

“In the current [environment] where we see more variable and uncertain oceanic conditions due to atmospheric changes in the Anthropocene, the ability to be flexible may continue to serve these animals well.”