Where Earth is coldest, where the digital universe was born, and where humanoids have four arms.

Tinderbox By Craig Timberg & Daniel HalperinPatient zero in the aids epidemic may have been an African porter traveling cross-continent with a European caravan, sometime around 1900. From there, colonialism continued to contribute to the spread of HIV, write journalist Craig Timberg and anthropologist Daniel Halperin. The disruption of traditional African societies and rituals led to a culture of promiscuity and eliminated male circumcision, which accelerated the disease’s advance, since the foreskin can be a reservoir for HIV. Today, the emphasis Western nations place on using only condoms and medication to combat aids may actually add to Africa’s continued struggle with the scourge. Timberg and Halperin argue that it is time for the West to back an alternative approach: returning to circumcision and launching a public-relations blitz about the dangers of infidelity, a tactic that has already shown some success in Uganda.—Veronique Greenwood

By George DysonThe digital universe was born in New Jersey. In the years after World War II, on the grounds of the Institute for Advanced Study in Princeton, mathematician John von Neumann assembled a group of eccentric engineers to build and program a “universal machine”—the modern computer’s direct ancestor, which was first envisioned by logician Alan Turing. Science historian George Dyson (son of physicist Freeman Dyson) has mined previously unpublished documents and interviews with the pioneering members of von Neumann’s Electronic Computer Project to tell what he calls the “creation myth” of the digital age. This rich account details everything from the project’s first calculations run simulating nuclear explosions to its legendary parties that once drew poet Dylan Thomas. —Eric A. Powell

in Pursuit of the Unknown By Ian StewartMost of us haven’t given much thought to Pythagoras’s theorem since geometry class, but we couldn’t lead our lives without it. That humble equation describing a right triangle led to the invention of coordinate geometry, an essential tool for mapping and measuring the planet. In fact, seemingly basic equations have enabled us to predict eclipses, engineer earthquake-proof buildings, and invent the refrigerator. In this lively volume, mathematician Ian Stewart delves into 17 equations that shape our daily existence, including those dreamed up by the likes of Einstein, Newton, and Erwin Schrödinger.—S. Y. 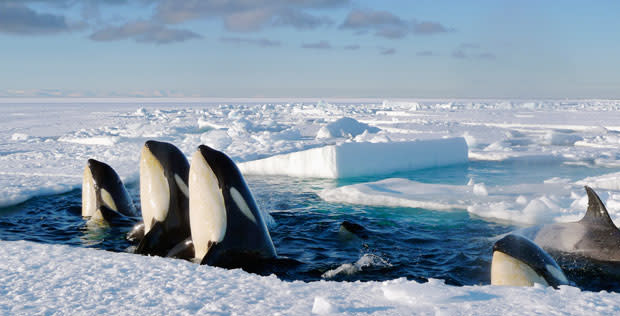 DiscoveryIt took 4 years, 38 sled dogs, 12 reindeer, 28 helicopters, and 840 hours trapped in blizzards for dedicated (and resourceful) camera crews to film the epic new nature documentary Frozen Planet. This seven-part special showcases the ecosystems and inhabitants of Earth’s most frigid climes with the same expansive, lush cinematography seen in Planet Earth and Life. All three are collaborations between the BBC and the Discovery Channel (not connected with DISCOVER magazine). With footage of frolicking polar bear cubs, mesmerizing time-lapse video of a frozen waterfall thawing in spring, and an up-close look at how rising temperatures are ravaging those environments, Frozen Planet has something for everyone—even those whose tastes run more to sitcoms than documentary. The ever-sonorous Alec Baldwin (30 Rock) narrates the American version of the show. Sundays at 8 p.m. ET/PT on the Discovery Channel.—Mary Beth Griggs

Fox Kiefer Sutherland (24) returns to TV as a widower whose mute, autistic son, Jake, is a mathematical savant. In the numerical detritus of everyday life—phone numbers, dates, times—Jake can sense patterns invisible to others. He uses these patterns to predict—and with his father’s help, propel people toward—events that pull seemingly unrelated people together. Exactly what force binds these strangers is a mystery, but an enigmatic academic (played by Danny Glover) hints that we may be hearing about string theory and quantum entanglement in future episodes. Thursdays at 9 p.m. ET/PT on Fox.—Saron Yitbarek

imagine By Jonah LehrerInspiration may seem as if it comes out of nowhere, but researchers have found that certain brain regions signal they have arrived at a eureka moment a full eight seconds before that feeling hits. That’s just one revelation from journalist Jonah Lehrer’s latest venture into the human mind, which explores both the science of imagination and the ingenuity-boosting policies of today’s most innovative companies. (One strategy: centralized bathrooms, to spark collaboration.) A practiced hand at melding narratives of cognitive science and creativity, Lehrer effortlessly interweaves tales of musicians, Pixar animators, and cocktail mixologists with the latest brain-scanning studies.—Valerie Ross

Best Nature Photography Show  San Diego Natural History MuseumFrom an autumnal shot of trees near Utah’s Calf Creek Falls (below) to a grayscale portrait of a swimming sailfish, some of the most spectacular sights nature has to offer now adorn the halls of the San Diego Natural History Museum. The museum’s third annual “Best of Nature” photography contest drew a thousand images of landscapes, wildlife, and starry skies from professional photographers and amateur shutterbugs across the globe. The 72 winning photos are on display through May 13.—S. Y.

Almost a century after it was written, Edgar Rice Burroughs’s classic sci-fi novel, the swashbuckling interplanetary romance A Princess of Mars, is finally coming to the big screen. The film—retitled John Carter after its main character, a Civil War veteran who finds himself mysteriously transported to the Red Planet, is in theaters now. We spoke with director Andrew Stanton (WALL-E, Finding Nemo) about his first foray into live action and how to make aliens seem real.

What got you interested in directing this story? I was a fan of the novel as a kid. I’d always hoped somebody would finally make the movie of it, and I was really crestfallen that it wasn’t going to be done. Then I thought, “Well, maybe I could get away with doing it.” And here I am.

Why did earlier efforts to make a movie of the novel fizzle out? It took until now for the technology to finally catch up. Nearly half the characters aren’t humanoid. To do that before computer graphics was either too expensive or just head-scratching. A lot of people forget the very first main computer-graphics character integrated into live action was Jar Jar Binks—as much as he gets derided. I remember watching Star Wars: Episode I, and within minutes of seeing Jar Jar on the screen, I went, “Wow, you could do the characters from Princess of Mars now, the way I’ve always pictured them.”

How did you reconcile Burroughs’s version of Mars, which was influenced by astronomer Percival Lowell’s idea that it was home to a civilization depleting its resources, the barren, hostile world we now know it to be? To get out of that conundrum— although you’re talking to a guy who let fish talk underwater— I made the movie take place when the book did, at the turn of the century. So nobody can tell me what was happening on Mars then. We had complete license to do it there. But we did use the topography. When we’re zooming in on Mars and looking at terrain on really wide shots, we based it on terrain that we know exists on Mars.

We haven’t yet found any Martian life, but in Burroughs’s novels the Red Planet is crawling with outsize, many-legged creatures. How did you go about creating the alien characters? You don’t have to look far to find some crazy stuff on our own planet, so we tried to derive the Martian flora and fauna from our knowledge of nature here on Earth. For example, some characters in the book are from this race of green men—anywhere from 9 to 15 feet tall with four arms and tusks—called Tharks. We decided to stop thinking about something with four arms as one Ken doll torso stuck on top of another. Instead, we thought, what would the musculature of something multilimbed like that have to be? How would nature evolve it? We ended up looking at starfish and changed the whole pectoral design of the Tharks’ chest so that it was a natural stretch to go to four points.

If the big picture is so fantastical, why go to such lengths to make the little details so realistic? We may not think about these little cues, but they give a sense of how things evolved, so that you could come to this planet and believe that it had a long history without knowing any of it. I wanted it to feel like we were really good anthropologists and had done our Martian research really well, even though it’s all fictitious.—V.R.