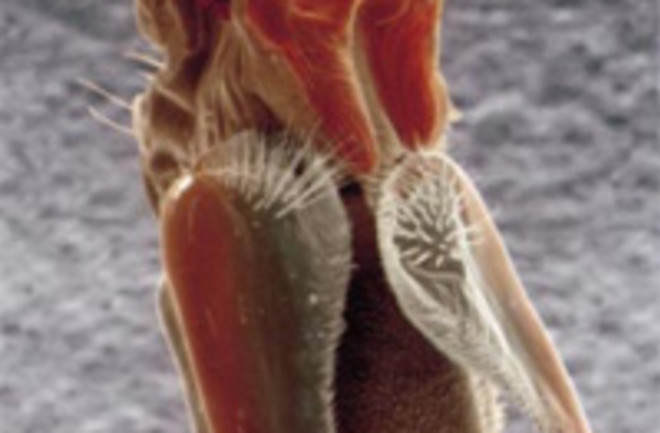 If you’ve ever complained about having bad sex, you really have no idea. Human women may have to complain about poor stamina or incompetent technique but the female seed beetle (or bean weevil; Callosobruchus maculatus) has to contend with her partner’s nightmarish penis – an organ covered in hard, sharp spikes. Just see if you can look at the picture on the right without wincing.

It’s no surprise then that females sustain heavy injuries during sex. But why have male beetles evolved such hellish genitals? What benefits do they gain by physically harming their partners?

It’s possible that the injuries directly benefit the males, either because they stop the females from mating again or spend more efforts in raising their fertilised eggs to avoid the strain of future liaisons.

The alternative is that the spikes could give the males an edge in “sperm competitions“, where they compete with rivals not through direct combat, but through fertilising as many eggs as possible. In this theory, the spines are important for winning these competitions, and the wounds they inflict are simply a nasty side-effect.

Cosima Hotzy and Goran Arnqvist from Uppsala University think that the latter theory is right. They have found that the penile spines are vital to a male’s success – those with the longest spikes fertilise the most eggs and father the most young. Size, it seems, really does matter.

The duo studied beetles taken from 13 countries across the tropics, from Brazil to the USA, and from Nigeria to Oman. The genitals of these different populations are very varied and to study them under a microscope, Hotzy and Arnqvist first had to fluff their subjects. They anaesthetised the males with carbon dioxide, and erected their penises with an “artificial inflater” – a microscopic plastic tip connected to a pump. Under a microscope, they measured the length of the longest spines and the size of the entire spine-bearing area.

They studied female beetles too, and all from a single population. Each one was allowed to mate once with a single male. A week later, Hotzy and Arnqvist dissected their sexual tracts to see how much scarring they had, using the distinctive black pigments on the scars to spot them. As you might expect, the males with the spiniest genitals inflicted the most amount of scarring on the females, in a way that was independent of the partners’ overall body size.

To measures the effects of these spines on the males’ reproductive success, the duo first mated virgin females with males from a single Nigerian population, who had all been sterilised by radiation. Two days later, the females were then paired with a second male, taken from one of the 13 worldwide populations. One week later, they counted all the eggs she laid. Every one of these must have been fathered by the second male, so their number represents his ability to successfully oust the sterile sperm of the first partner.

Again, the males with the longest penile spines were more likely to be the victors of the sperm competition and again, this link had nothing to do with either the male’s body size or his general health. The degree of scarring in the females was also linked to the male’s success at sperm competition, but to a much lesser extent and certainly not when the length of the spines was taken into account. It is the spines, rather than the damage they inflict, that is the key to the male’s success.

It’s not entirely clear what exactly the spines do. They could anchor the male during sex, position his penis in the right spot during sex, or scrape out the sperm of rivals from the female’s genitals. Either way, they have clearly evolved to allow the male seed beetle to out-ejaculate his rivals.

This fierce competition for fertilisation rights is fairly common among insects and has led to the evolution of some truly horrific sexual strategies. The seed beetle is far from the only example of what Hotzy and Arnqvist call “sexually antagonistic co-evolution”.

Some species, like the dung fly, also have armoured genitals. Others, like the familiar fly Drosophila melanogaster, have toxic semen laden with chemicals that actually slash the lifespans of females, who can literally mate their way to death. But even here, the effect of this lethal cocktail isn’t the early death of the female; that’s an unfortunate side-effect. Their goal is to encourage the female to lay more eggs or reject further suitors, or even kill the sperm of other males.

And possibly the most cringeworthy sexual technique of all belongs to the male bed bug, whose penis is like a hypodermic needle. He stabs it through the female’s back and injects his semen straight into her abdominal cavity. It’s a method that’s been appropriately named “traumatic insemination”.

Now, for anyone who has managed to stick this through (and believe me, I’ve been wincing with every keystroke), female insects have evolved their own defences. The female seed beetle, for example, has a huge amount of connective tissue lining her sexual tracts so that the damage inflicted by the males doesn’t affect her too badly. She also takes a more direct approach to protecting herself – when she’s had enough, she simply kicks the male until he lets go. Doing so cuts the total length of mating by a third – this is one species where the females want the males to ejaculate sooner.