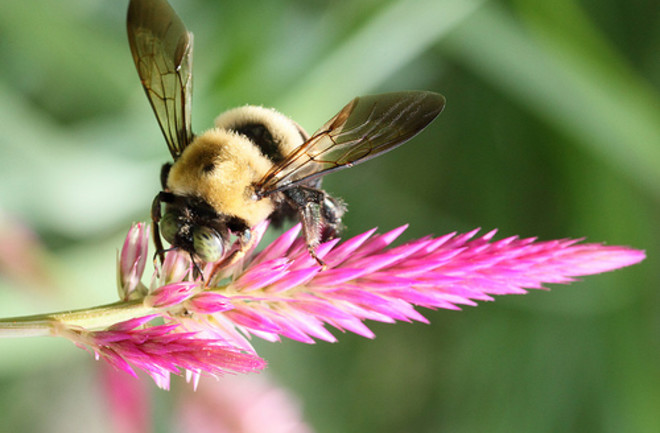 Photo: flickr/James DiedrickI don't know about you, but I totally avoid making difficult choices, particularly when there doesn't seem to be any way to determine the what the correct decision might be. Surprisingly, the study shown here suggests that honeybees might approach decisions in the same way. The experiments consisted of decision tests of different levels of difficulty: the "easy choices" were a reward (sugar, yum!) placed clearly above or below a visual reference, and a punishment (quinine, yuck!) in the other position. "Hard choices" were represented by the reward being offset but overlapping with the visual reference, and "impossible choices" were actually impossible to predict: "For impossible trials (so-called because objectively they had no correct answer and therefore were rewarded pseudorandomly), the centers of both targets were in line with that of the reference." Honeybees were allowed to choose to either be rewarded, punished, or to "opt out" and fly away. It turns out, when presented with harder choices, the bees were more likely to "opt out", indicating that when the "right answer" is less obvious, the best choice may be to make no choice at all (at least if you are a bee... or me!).Honey bees selectively avoid difficult choices. "Human decision-making strategies are strongly influenced by an awareness of certainty or uncertainty (a form of metacognition) to increase the chances of making a right choice. Humans seek more information and defer choosing when they realize they have insufficient information to make an accurate decision, but whether animals are aware of uncertainty is currently highly contentious. To explore this issue, we examined how honey bees (Apis mellifera) responded to a visual discrimination task that varied in difficulty between trials. Free-flying bees were rewarded for a correct choice, punished for an incorrect choice, or could avoid choosing by exiting the trial (opting out). Bees opted out more often on difficult trials, and opting out improved their proportion of successful trials. Bees could also transfer the concept of opting out to a novel task. Our data show that bees selectively avoid difficult tasks they lack the information to solve. This finding has been considered as evidence that nonhuman animals can assess the certainty of a predicted outcome, and bees' performance was comparable to that of primates in a similar paradigm. We discuss whether these behavioral results prove bees react to uncertainty or whether associative mechanisms can explain such findings. To better frame metacognition as an issue for neurobiological investigation, we propose a neurobiological hypothesis of uncertainty monitoring based on the known circuitry of the honey bee brain."

Related content: NCBI ROFL: Is that bee on crack? Oh, wait…it is.