They're called "fallstreak holes," and they occur when parts of a cloud suddenly fall away toward the surface. 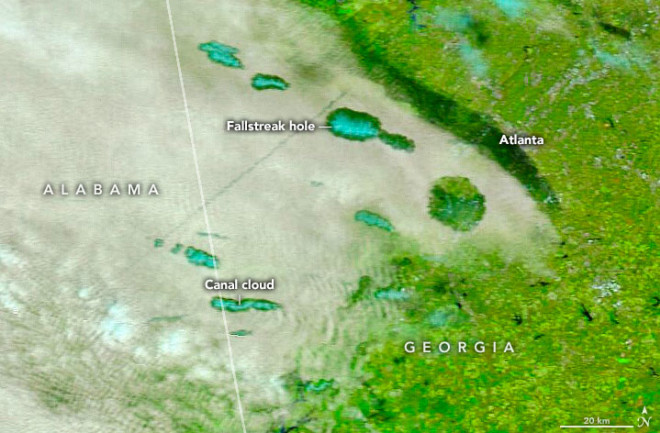 Yes, it's true — parts of a cloud deck can actually fall suddenly toward Earth, leaving behind giant holes.

They're called "fallstreak holes," and they've been spotted recently by satellites over parts of North America.

The false-color image above, acquired by NASA's Terra satellite, shows fallstreak holes that developed over Georgia in late January of this year. Also visible are their longer, skinner siblings called "canal clouds," which form by the same physical mechanism.

Here's what the scene looked like to Terra in natural color:

"Viewed from below, it can appear as if part of the cloud is falling out of the sky," writes Kathryn Hansen of NASA's Earth Observatory in a piece about the phenomenon. "As it turns out, that is actually what’s happening."

All It Takes is a Little Nudge

The holes form in mid-level clouds composed of super-cooled water droplets that have managed to remain liquid at temperatures below freezing. With just a little nudge, they can suddenly freeze, forming ice crystals. These in turn beget yet more ice crystals, in a self reinforcing process. And as the accumulating ice crystals grow bigger, they get heavy enough to fall out of the sky.

The result: a giant hole in the cloud layer.

The false-color image at the top of the page combines infrared and visible light to help distinguish between ice crystals and liquid water droplets. Ice crystals that have yet to fall out of the sky appear in blue. You can see them inside holes in the water clouds, which are seen in white.

Just to the southwest of Atlanta, there's also a large, circular fallstreak hole with no apparent ice crystals remaining in it. Apparently, almost all of the ice has fallen away here.

That hole — measuring about 70 square miles — is just three miles west of the runways of Hartsfield-Jackson Atlanta International Airport. That may be no coincidence. Fallstreak holes and, in particular, canal clouds, often are associated with aircraft activity.

Animation of GOES-16 satellite images shows fallstreak holes in the clouds over the Carolinas on February 22, 2021. (Credit: RAMMB/CIRA)

Remember, all it takes is a little nudge for super-cooled water droplets to suddenly freeze into ice crystals. And that nudge can come from an airplane ascending or descending through the cloud deck. Here's how:

As the plane passes through the clouds, air is forced up and over the wings. When this happens, super-cooled water droplets within that air can be chilled just enough to suddenly freeze, triggering the self-reinforcing process that ultimately leads to fallstreak holes and canal clouds.

The elongated canal clouds visible in the animation above were likely caused by this process.