The story of one of the most important expeditions in history. 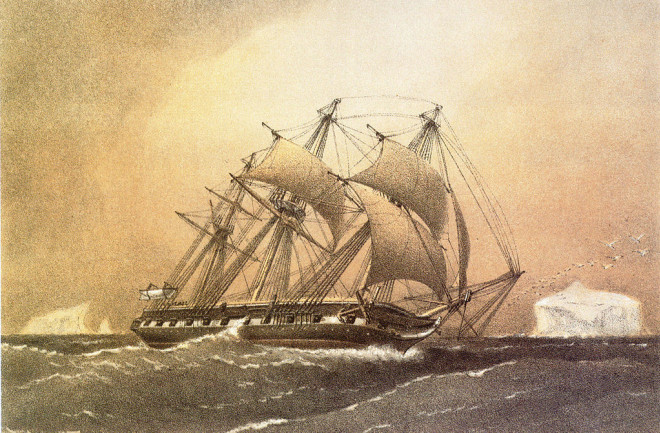 A painting of the HMS Challenger by William Frederick Mitchell. (Credit: Wikimedia Commons)

We know more about the surface of the moon than about the ocean floor. Scientists estimate that 91 percent of life under the sea hasn’t been discovered yet and more than 80 percent of the ocean has never been explored.

What we do know about the ocean makes it almost more mysterious. It’s an alien landscape, complete with undersea mountain ranges and trenches deeper than Mount Everest is tall, home to a glorious nightmare carnival of weird, often glowing animals. And most of what we know has only come to light in the last 150 years, starting with the expedition of HMS Challenger.

From 1872 to 1876, the 200-foot-long warship was repurposed as a floating lab for the world’s first large-scale oceanographic expedition, circumnavigating the globe and dredging up samples of never-before-seen creatures from the ocean floor. The Challenger explorers brought to light thousands of new species and revealed the oceans to be a place of startling depths and untold wonders. Scientists today still rely on the Challenger findings to study everything from seashells to climate change.

The Challenger expedition was inspired, in part, by that age-old motivation: to prove somebody wrong. In 1843, a naturalist named Edward Forbes posited that “the number of species and individuals diminishes as we descend, pointing to a zero in the distribution of animal life as yet unvisited” at depths below 1,800 feet.

But several small expeditions hinted that he couldn’t be right: HMS Lightning and (the incredibly named) HMS Porcupine found animals like clams, scallops, and corals at depths below Forbes’ theoretical limit. In light of these discoveries (and perhaps spurred by telegraph companies’ desire to create more undersea cables), the Royal Society of London for Improving Natural Knowledge approved a new, more thorough expedition: a three-year trip around the globe to plumb the ocean’s deepest basins, to ascertain the sea floor’s physical and chemical characteristics and to figure out just how far into the ocean’s depths life blooms.

Challenger set sail four days before Christmas in 1872 out of Portsmouth on the southern coast of England. There were about 250 men on board, including six scientists, who the naval officers and crew nicknamed “the Scientifics.” Challenger was a small warship retrofitted for a scientific mission; 15 of her 17 guns were removed to make room for laboratories and equipment.

Before they set sail, the ship’s steward’s assistant, a 19-year-old named Joe Matkin, wrote to his cousin, “All the Scientific Chaps are on board, and have been busy during the week stowing their gear away. There are some thousands of small air tight bottles, and little boxes about the size of Valentine boxes packed in iron tanks for keeping specimens in, insects, butterflies, mosses, plants, etc. There is a photographic room on the main deck, also a dissecting room for carving up bears, whales, etc.”

The ship also carried 181 miles of Italian hemp rope that would be used to measure the water’s depth and lower dredges to the sea floor.

Zoological Laboratory on H.M.S. challenger. The Royal Society outfitted this laboratory with a small library, hundreds of miscellaneous scientific instrument and "spirits" of wine for preserving specimens. (Credit: University of California, San Diego)

Every few days, Challenger sounded, or plunged a weighted line into the water to determine how deep it was. They also recorded the ocean’s temperature at various depths and dragged a weighted net with a 10-foot-wide mouth across a patch of the ocean floor and hauled aboard the sea creatures and sediments it dredged up.

Matkin wrote to his cousin, “When the dredge is hauled up [the scientists] stand round in their shirt sleeves, and commence overhauling the mud for fish etc., and as soon as they get any, down they all go to dissect and pickle them in glass jars.”

The crew sometimes brought in impressive specimens — one drawing from the expedition shows the crew hauling aboard a large shark, while two of the ship’s dogs watch warily.

Other times, though, the hauls were less exciting. “The mud! Ye gods, imagine a cart full of whitish mud, filled with minutest shells, poured all wet and sticky and slimy on to some clean planks,” wrote Sublieutenant Lord George Campbell about the sediments dredged from the sea floor. “In this the naturalists paddle and wade about, putting spadefuls in successively finer and finer sieves, till nothing remains but the minute shells.”

They did this all the way around the world, from England to the North Atlantic and the Caribbean, down to Brazil and east to the southern tip of Africa. They dipped down within sight of Antarctic icebergs and then headed up, hugging Australia’s southeast coast and making their way through Micronesia and Asia, then east across the Pacific, tracing South America and arriving back in England on May 24, 1876, three and a half years after the journey’s start.

Halfway through the journey, in the spring of 1875, Challenger made one of its greatest discoveries: the Mariana Trench, containing the deepest point on Earth. The Mariana Trench is located near Guam, about 1,500 miles east of the Philippines. There, one of the Earth’s tectonic plates slips under another, resulting in a 1,580-mile-long groove in the sea floor.

At the lowest point Challenger recorded, the sea floor lay more than five miles below the water’s surface (later researchers would find that an even deeper point exists nearby, nearly seven miles deep). The crew wasn’t expecting the spot to be so deep; the first time they sent down a weight to measure the depth, they ran out of rope. When they sent down a thermometer, the glass cracked.

At the time, the scientists named it Swire Deep after one of the ship’s naval officers, though it’s since been renamed the Challenger Deep. Today’s scientists study the Mariana Trench to learn how tectonic plates shift and how plastic waste has reached even the remotest parts of the planet. All that work has its roots in the Challenger expedition.

Crew members examining the contents of a haul on board the Challenger. (Credit: Wikimedia Commons)

Oddly, for one of the greatest scientific achievements of the voyage, the team wrote relatively little about exploring the deepest part of the ocean. In the naturalist Henry Moseley’s 520-page account of the expedition, he skips over the Mariana Trench entirely — all he says about that leg of the journey is that it was a “most tedious voyage.”

He did, though, find room for the following chapters from the same two-month period: “Habits of Gar-fish,” “Rice Fields,” and the nail-biter, “Fern Resembling a Liverwort.” (His and his colleagues’ reports also include jarringly racist descriptions of the people they met — a reminder that this culture of exploration can hide a dark side.)

Challenger’s scientists were actually a little disappointed by the animals they found in the deep sea. Darwin had postulated that the deep sea would be full of organisms that had long since gone extinct on land; the scientists on board were let down when that didn’t seem to be true.

But the new animals they did find weren’t too shabby. The Challenger expedition returned with 4,700 never-before-seen species, including sea pigs (squishy pink potato-creatures that scoot around the sea floor on 14 legs) and faceless cusk-eels (foot-long fish with tiny, barely visible eyes and mouths on the underside of their chins, hence the “faceless”).

And even species that were already known still possessed the capacity to amaze. “A giant Pyrosoma was caught by us in the deep-sea trawl,” Moseley wrote of one of the specimens that caught his eye, a bioluminescent colony of tiny organisms that came together in a four-foot-long glowing tube. “I wrote my name with my finger on the surface of the giant Pyrosoma, as it lay on deck in a tub at night, and the name came out in a few seconds in letters of fire.”

The thousands of specimens collected by Challenger are now housed in museums around the world, with the lion’s share going to London’s Natural History Museum. The specimens are still used in scientific research today.

“Just because they’re old, it doesn’t mean that they lose value. In fact ... in terms of looking at historical trends, they only increase in value with their age,” says Holly Morgenroth, a natural history curator at the Royal Albert Memorial Museum in Exeter, England. “The Challenger collection gives us what the seabed looked like 150 years ago. Without that, we could really only guess. It provides the evidence that we need to show that things have changed, or indeed if things have stayed the same.”

Using the expedition’s specimens and records, researchers are able to see if species live in the same places they did 150 years ago, compare potential new species to the original specimens discovered by the Challenger and explore the ways that climate change is affecting animals. Seashells from today are often thinner than the ones collected then, since extra carbon dioxide in the atmosphere can make the ocean more acidic — the seawater eats away at the shells.

Specimens from the Challenger expedition. Some are still used for research today. (Credit: Royal Albert Memorial Museum and Art Gallery)

And while the zoological specimens are some of Challenger’s flashier legacies, another type of data from the expedition has proved critical to researchers in recent years: the ocean temperature logs.

“If you want to understand how much the world is warming today, you have to take into account things that happened before the Industrial Revolution,” says Jake Gebbie, an oceanographer at the Woods Hole Oceanographic Institute who published a paper in Science in 2019 about deep ocean temperatures over time using Challenger data.

"The temperature data launched an entire discipline called physical oceanography. It’s our first picture of the physical ocean all around the globe, and it remains a really important touchstone for looking back at the history of the climate,” says Josh Willis, a climate scientist at NASA who has used temperature data from Challenger in his research on global climate trends.

“Over 90 percent of the heat trapped by greenhouse gases is actually warming the ocean. Global warming is really ocean warming,” Willis explains. “Water is really good at absorbing heat, and most of the planet is covered in water.” And all that heat absorption comes at a cost: life in the ocean, especially coral, is already being harmed by climate change.

Andreia Salvador, curator of mollusks at the Natural History Museum in London, also notes the importance of the Challenger collections in light of climate change and habitat destruction. “We need to know what’s out there. We don’t live alone on this planet, and now more than ever, we need to conserve and preserve what’s there,” she says.

The naturalists on board Challenger couldn’t have fathomed all the ways their findings would be used today. That’s often the case with science — it’s an investment in a future that we can’t even imagine. “There are so many applications for the [Challenger] collections, and we still don’t even know the real possibilities,” says Salvador.

Scientists don’t necessarily know how their research will be used in the future, but they soldier on, motivated by an intrinsic drive to understand the world around them. It’s a sentiment reflected in a song written for Challenger’s crew, documented by Matkin. He sent home the lyrics to his cousin: “Our mission is to teach the world what man ne’er knew before; all truth, by science is unfurl’d, which nature has in store.”