A fossil find rewinds the timelinefor the creation of stone tools. 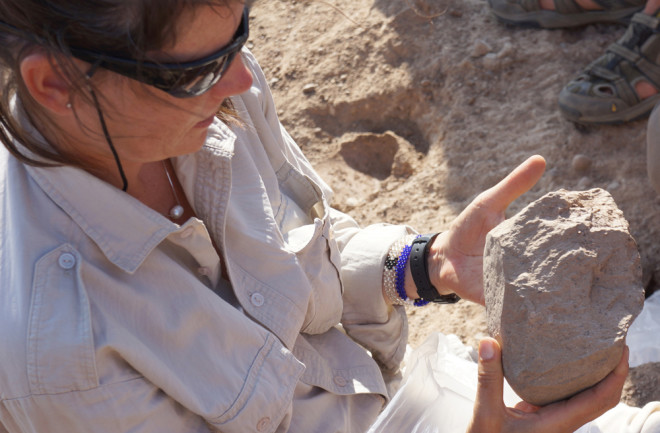 Researcher Sonia Harmand holds one of the several stone tools found at the Lomekwi site near Kenya's Lake Turkana; at 3.3 million years old, they are the earliest stone tools ever found. | MPK-WTAP

The road almost not taken led to the discovery of a lifetime. In 2011 archaeologists Sonia Harmand and Jason Lewis of Stony Brook University and colleagues took a wrong turn as they followed a creek bed, surveying sites around Lomekwi, near Kenya’s Lake Turkana. A team member spotted stone tools eroding from sediment laid down 3.3 million years ago, making them the oldest ever found.

Up to 8 inches long, these tools are larger, heavier and less refined than those of the 2.6-million-year-old Oldowan type, the previous record-holder of the oldest tool title. Like Oldowan tools, the Lomekwian tools were clearly modified with intention, Harmand says. The maker mainly used a two-handed technique, holding a core on another large rock, or anvil, and hitting it with a hammer stone to release sharp flakes.

Until now, stone tool knapping and the abstract thought it requires have been credited to the genus Homo, beginning with Homo habilis, the presumed originator of the Oldowan style. But the Lomekwian toolkit, reported in Nature in May, predates H. habilis by half a million years. So far, all the candidates for making the Lomekwian tools are pre-Homo species, including Australopithecus afarensis of Lucy fame, and Kenyanthropus platyops, discovered in 1998 near the Lomekwi site. Says Lewis, “If it’s a non-Homo species, that’s a big game changer.”

Did our hand strength and dexterity evolve with earlier australopiths?

To learn more about the evolution of the “power squeeze” — the grip we use to hold a hammer — University of Kent anthropologist Matt Skinner compared hand and wrist bones from living and extinct hominids using 3-D X-ray technology. Human hand bones showed increased density in certain key spots associated with toolmaking.

In research reported in Science in January, Skinner found the same modifications in corresponding bones from Australopithecus africanus, possibly a direct ancestor of the Homo genus, which suggests that toolmaking was an earlier adaptation than previously thought. Could this help us identify the Lomekwian toolmakers? “The main point,” says Skinner, “is that there was no Homo around [3.3 million years ago], so it would either need to be Australopithecus or Kenyanthropus who made those tools.” — HW