A computer scientist reveals the text of ancient documents beyond repair. 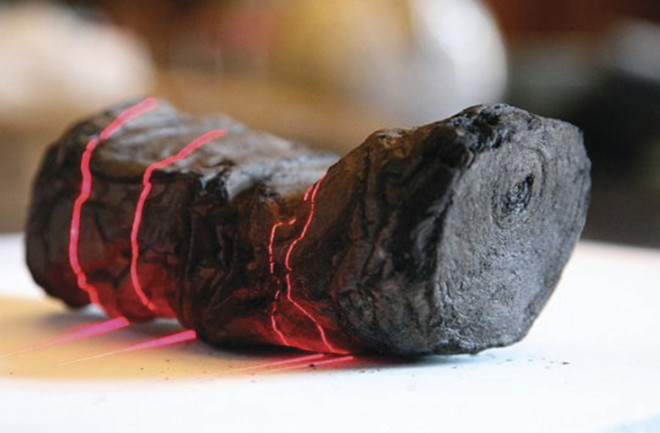 Brent Seales has made a career of unlocking lost secrets. With specialized software he and his team developed, the University of Kentucky computer scientist can read ancient scrolls too fragile to unroll. Recently, he watched as Hebrew consonants from the charred remains of an ancient Jewish scroll flashed across a computer screen.

Archaeologists discovered the scroll in 1970 at En-Gedi, the site of an ancient synagogue in Israel that burned in the sixth century. The fire reduced the document to a charred lump that crumbled at the slightest touch. But last year, Seales’ software virtually unwrapped a three-dimensional scan of the scroll’s internal structure, flattening the text to two-dimensional images. Centuries after it was last read, the scroll’s writing was once again accessible. Inside were two chapters of the Book of Leviticus; researchers carbon dated the ink to as early as the third century.

Discover spoke with Seales about his efforts to unwrap the En-Gedi scroll, as well as his next project.

The work revealed the text of the En-Gedi scroll, pictured, which was untouched for 45 years after its discovery. (Credit: Amir Cohen/Reuters)

Q: Tell us about the technology behind your method. What was key to “unrolling” this scroll?

A: Tomography [a 3-D version of X-rays, also used in hospital CT scans] is the basis for everything. But another key piece has been the acceleration of handling large datasets and being able to visualize them on ordinary computers. That’s been done only in the last five years.

Q: Without getting too technical, how did you figure the way the letters from the scans would look if laid out?

A: The scanning data that comes from tomography is very unstructured and hard to visualize. So creating virtual meshes [the component of the software that represents the paper of the scroll], and developing how they should look, was key in that visualization. Those were things that had to happen to be able to read anything in such a complicated set of data.

Brent Seales and his team digitally unfurled this scroll from En-Gedi, an ancient synagogue in Israel. From the charred remains, scans revealed Hebrew text from the book of Leviticus. (Credit: Seth Parker/University of Kentucky)

Q: How is your software changing the way researchers study these sorts of damaged texts?

A: It’s completely noninvasive. You can read them without opening or disturbing the actual artifacts. These scrolls are so fragile that even pulling them out of the collection causes damage. So the technology enables us to delve into a virtual world without having to deal with a physical world, where you might damage something.

Q: You’re now working with texts buried by the eruption of Mount Vesuvius in A.D. 79. What are you looking forward to with this latest project?

A: Opening even some of those scrolls holds the promise of being the biggest discovery ever in antiquity literature. Some people think it will just be more philosophical texts. But some could be lost texts, and this technology could reveal them again to the world. That is really exciting.

Q: How have these projects changed your perspective on software programming?

A: I’ve learned that this stuff is more personal and connected to me than I thought. If you read the literature, you see everything we have now: love, conflict, people trying to understand their place in the world. I get pulled back and realize how special it is and what it means to be human.