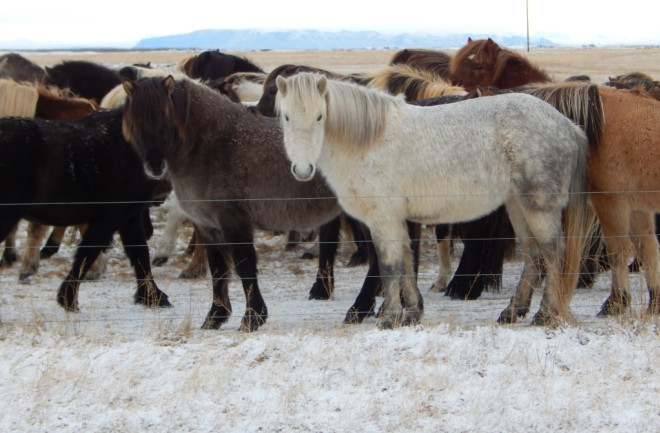 The history of the horse is not quite what we thought: Among the findings of an unprecedented analysis of ancient DNA, today's Icelandic ponies (above) are some of the last vestiges of a European lineage nearly wiped out by horses from Persia. (Credit: G. Tarlach) In the largest-ever ancient DNA study of its kind, researchers have pieced together the history of the horse: It's an epic saga sprawling across continents and 5,000 years of evolution and domestication, and yes, it has plot twists. Among the finds: researchers uncovered two lost lineages of the animal on opposite ends of Eurasia and determined that the modern horse is very different than even its recent ancestors, thanks in part to geopolitics. The scope of the study included 278 samples of genetic material from more than 40,000 years of the horse family tree. In addition to the two known living branches, the domestic horse and the Central Asian Przewalski's horse, the team discovered two now-extinct lineages that are not closely related to any living horse. One of the newly discovered lineages called Siberia home; the other was native to the Iberian Peninsula. The team behind the new research compared the lost horse lineages to Neanderthals, Homo sapiens' closest evolutionary kin. But the horses lasted longer than Neanderthals: Both the Siberian and Iberian populations went extinct only in the last 4,000 or so years.

The new genetic history of the horse uncovered two lost lineages as well as a recent sharp decline in genetic diversity. (Credit: Fages et al 2019, Cell)The Need for Speed For the last 5,000 or so years, the horse has done more than any other animal to affect the course of human history (sorry, dogs and cats...it's not even close). Horses have hauled us and our stuff (including our languages, cultures and diseases) all over the world. They've charged into battle, plowed fields and crisscrossed continents delivering news. And, after death, they've been broken down into a variety of useful products, from hides to food. But the new research found that some of the traits we associate most closely with horses have only recently evolved. For example, the genetic variations associated with locomotive speed appear to be the product of selective breeding only in the last 1,000 or so years.

A modern European horse grazing in Denmark. (Credit: Ludovic Orlando)Near-Loss of the Euro-Horse The genome-wide analysis also found that established populations of European horses were nearly wiped out in the 7th to 9th centuries thanks to the arrival and spread of horses with a Persian pedigree. The genetic switcheroo was likely due to waves of Islamic armies and explorers fanning out from the southwestern corner of Asia at the time. Horses originating in Persia eventually spread far beyond the battle lines through trade routes. Central Asian domestic horse populations also experienced an influx of Persian genes. Today, the last vestiges of the European lineage of horses can be found in small populations scattered around northwestern Europe, notably the shaggy ponies of Iceland.

A couple of Icelandic ponies having an excellent hair day. (Credit: G. Tarlach)Loss Of Diversity Beginning about 2,000 years ago, the diversity of the Y chromosome in domestic horses began to decline, likely because breeders were increasingly choosing specific stallions as studs. But the researchers also found that horses' overall genetic diversity has fallen by about 16 percent just in the last 200 years, probably because of increased emphasis on the "purity" of a line. Despite the comprehensive nature of the new study, researchers were unable to unravel perhaps the most significant mystery about these animals: Where, and when, were horses first domesticated? Archaeological evidence of horse domestication points to the Botai culture of Central Asia at least 5,500 years ago, but those horses are genetically related to the wild Przewalski's horse, not domestic horses. Various studies have suggested different areas of central and southwestern Eurasia as the homeland of the domestic horse, but the matter remains unresolved. Personally, I'm betting that the earliest history of the horse took a course not unlike that of the dog: A sweeping 2016 paleogenetic study showed that dogs were domesticated more than once, at about the same time but in different locations, though one lineage eventually dominated. The massive history of the horse study appeared Thursday in Cell.

Modern horses roam the steppes of Kazakhstan in Central Asia, likely not far from where the first horses were domesticated more than 5,000 years ago. (Credit: Ludovic Orlando)