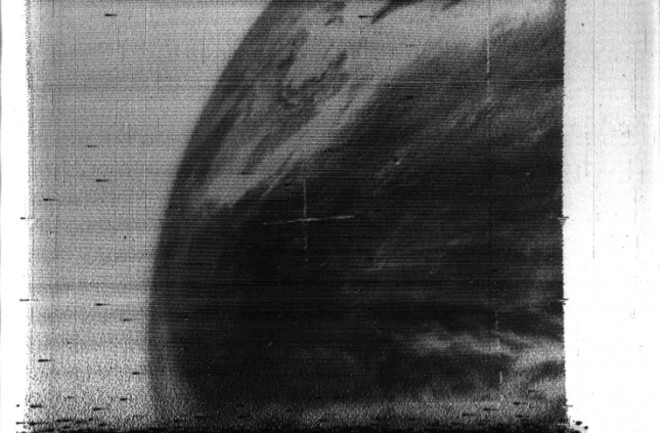 The first image ever transmitted back to Earth from a weather satellite. It was captured by TIROS-1. (Image: CIMSS Satellite Blog) The awesome folks over at the satellite blog of the Cooperative Institute for Meteorological Satellite Studies posted this historic image yesterday — and I just couldn't let it go without giving it more exposure. The first weather satellite image ever, it was captured by TIROS-1 on April 1, 1960 — meaning yesterday was the 53rd anniversary of the event. Okay, that may not be as significant as, say, the 50th anniversary was. But this is still a great opportunity to see how far we've come with remote sensing of the home planet. On the same day that the satellite sent back this image, the U.S. Census Bureau determined that the resident population of the United States was 179,245,000. As I write this post, the bureau estimates the population to be 315,602,806. (By the time you read this, the population will be even larger!) Thanks in part to the pioneering efforts of TIROS-1, and weather satellites that followed, today we have access to advanced warming of extreme events like hurricanes — a capability that has saved many lives. "TIROS" stands for Television Infrared Observation Satellite Program. Here's how NASA describes its mission:

The TIROS Program . . . was NASA's first experimental step to determine if satellites could be useful in the study of the Earth. At that time, the effectiveness of satellite observations was still unproven. Since satellites were a new technology, the TIROS Program also tested various design issues for spacecraft: instruments, data and operational parameters. The goal was to improve satellite applications for Earth-bound decisions, such as "should we evacuate the coast because of the hurricane?".

Here is the second image taken by Tiros-1 — 53 years ago today:

Tiros-1 transmitted a second weather image on April 2, 1960, 53 years ago today. Head over to the CIMSS satellite blog for more details. The post there includes spectacular comparison images from the SUOMI NPP satellite of the same general area: Maine and the Canadian Maritime provinces. One of them is a "visual image at night," meaning it was shot under moonlight. You can see the sparkling lights of cities.