Himalayan glaciers lost ice twice more quickly in the past few decades than they did between 1975 and 2000. 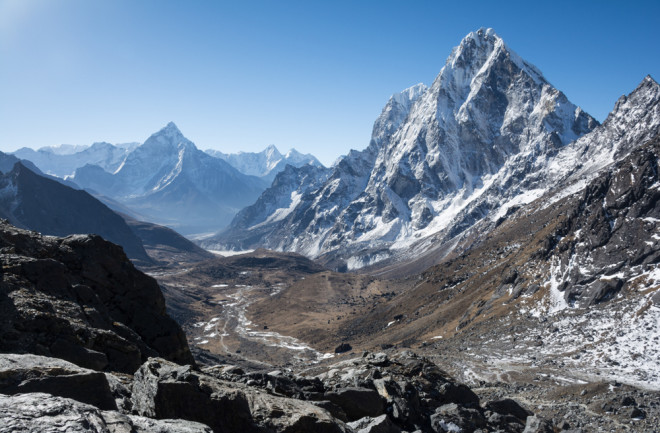 Climate change could mean trouble for Himalayan glaciers. New research reports that they’re melting twice as fast today as they were at the turn of the century. (Credit: Nik Bruining/Shutterstock)

Home to Mount Everest and many more of the world’s tallest peaks, the Himalayas rise up from the Ganges River north to the Tibetan Plateau. This iconic mountain range is also home to thousands of glaciers.

These rivers of ice provide valuable fresh water to surrounding regions. But the Himalayan glaciers are melting fast, according to a new study published Wednesday in the journal Science Advances.

“This is the clearest picture yet of how fast Himalayan glaciers are melting over this time interval, and why,” Joshua Maurer, an earth scientist at Columbia University and lead author of the new paper, said in a press release.

Maurer and colleagues discovered Himalayan glaciers lost ice twice more quickly in the past few decades than they did between 1975 and 2000. That’s significant because ice loss from glaciers contributed more to sea level rise than ice sheets between 1993 and 2010, according to the Intergovernmental Panel on Climate Change 5thAssessment Report.

Using declassified spy satellite imagery extending back to the 70s, the researchers quantified ice loss for 650 of the region’s largest glaciers. Then they compared the trends to data from more recent satellite remote sensing studies. All told, the analysis spanned more than 40 years of ice loss — from 1975 to 2016 — and 1,200 miles of land, from the northernmost region of India across Nepal to Bhutan.

The team reports that between 2000 and 2016, glaciers across the Himalayas lost ice twice as fast as they did at the end of the 20th century.

The researchers then looked for why the melting glaciers picked up speed in the last few decades. They estimated how much air temperature would have had to change to provide enough energy to melt the glaciers at such a rapid clip. Their analysis revealed air temperatures would have had to be 0.7 to 2.5 degrees Fahrenheit warmer during the 2000 to 2016 period than they were between 1975 and 2000.

Their estimate was right on target. Weather station records from across the region report air temperatures were about 1.8 degrees F warmer in the last few decades compared to the final decades of the last century.

“Even glaciers in the highest mountains of the world are responding to global air temperature increases driven by the combustion of fossil fuels,” said glacial geographer Joseph Shea, who was not a part of the study, in the statement.

“It shows how endangered [the Himalayas] are if climate change continues at the same pace in the coming decades,” added glaciologist Etienne Berthier, also not involved in the study.