An ambitious project at Saint Catherine's Monastery in Egypt is preserving thousands of manuscripts with crucial insights into our earliest written history. 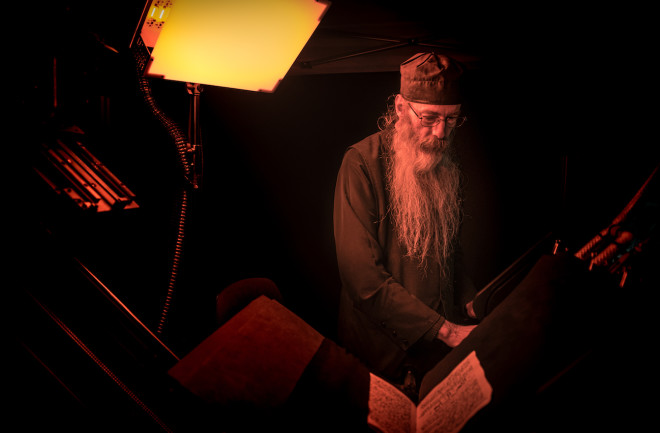 It’s no wonder that Christian tourists flock to Saint Catherine’s, which sits at the foot of Mount Sinai and is recognized as the world’s oldest continuously operated monastery.

The site can be traced back to the fourth century A.D., when Roman Empress Helena called for the construction of a sanctuary around what was considered the site of the burning bush. Later in the sixth century, Emperor Justinian established a monastery at the location with a shrine and fortifying walls. If you stop by today, you can glimpse what is advertised as a "descendant" of the bush.

Today, Saint Catherine’s holds evidence of its rich history in the form of over 4,000 rare ancient and medieval manuscripts. These include religious documents, such as sections of the Codex Sinaiticus, the oldest written version of the New Testament that was compiled in the fourth century. The library at Saint Catherine's also contains works on history, philosophy and medicine in 13 different languages, including Latin, Arabic, Aramaic and Syriac.

Some of these manuscripts were, until recently, shrouded in mystery: Saint Catherine’s holds a variety of palimpsests, or written documents that scribes erased and reused between the fifth and 12th centuries. In 2011, the UCLA Library and a nonprofit research organization, the Early Manuscripts Electronic Library (EMEL), began working with Saint Catherine’s to apply multispectral imaging to the palimpsests and has since uncovered over 300 texts not read since the Dark Ages. They even encountered lost languages in the process.

To preserve the library’s troves of cultural heritage, UCLA and EMEL have continued their work with Saint Catherine’s beyond the original plan of palimpsest imaging and are digitizing its entire (massive) collection. The library’s scope ranks only second to the Vatican Library, and it has long attracted scholars and visitors from around the world (if they’re willing to travel deep into the Sinai desert, that is).

A photography station at Saint Catherine's Monastery, where the digitization team spends seven hours a day on the effort. (Credit: Chloe Sharrock/MYOP)

The researchers are currently working through Syriac and Arabic manuscripts, including documents associated with the Islamic Golden Age that spanned the eighth and 13th centuries. In that era, ancient Greek knowledge was translated into Arabic and bolstered scientific and cultural achievements. “Everything would have been lost if we said, ‘Okay, thanks,’ and left,” says Todd Grappone, associate university librarian for digital initiatives and information technology at UCLA. “It’s just such a unique place that we felt like we couldn’t just stop — we had to continue.”

Anyone can access the images within the growing online collection. The project team aims to generate around 400,000 images in the first phase alone, which is set to conclude this March.

These digitization efforts are arriving just as the documents’ fate hangs in the balance. For one, political instability has rocked the Sinai region over the last decade: In 2017, the Islamic State attacked a nearby police checkpoint.

And although dry local conditions have long proven beneficial for preservation, climate change-induced increases in temperature and humidity could threaten already-degrading materials. This reflects a broader concern for the fate of Egypt’s various archaeological sites. “We felt the need to get in there and digitize some of the stuff that was at risk in order to ensure that future generations of scholars have access to this content,” Grappone explains.

Still, recent technological advancements have enabled previously impossible insights at Saint Catherine's; for example, the multispectral imaging technology used on the palimpsests and the software used to process them are relatively new, Grappone notes.

The digitization process at the monastery involves painstaking precision on the part of the camera operators and conservators who travel in from Greece. They place manuscripts on cradles that support fragile binding and rotate them via computer-controlled motors, and the pages are gingerly turned by hand.

Manuscripts are carefully placed onto machine-powered cradles that can rotate them for photos and support fragile binding. Meanwhile, the digitization team turns the pages by hand because it was determined the skin's natural oil is less erosive than gloves. (Credit: Chloe Sharrock/MYOP)

Meanwhile, two cameras simultaneously capture pages side-by-side. Several images taken in green, red and blue light are combined via computer software into a single photo that effectively reproduces the manuscript's original illustrations. It can take between a few days and weeks to digitize a manuscript, depending on the stage of preservation. The entire process is supervised by the monastery librarian and Texas native, Father Justin.

Chloe Sharrock, a documentary photographer and reporter living in France, covered the digitization effort in 2018 because she was drawn to the unique visuals. “For me it was this combination of this place that was completely frozen in time, and yet where you have this super modern, high-end technology,” she says.

Even with the careful handling of manuscripts, Grappone says, some are so degraded that they can’t be opened widely enough to take photos. In the future, it may be possible to snap photos through a closed book, he predicts. Scientists have recently tried to accomplish just that — a 2016 study used terahertz radiation, for example, to peek into stacks of paper. And last year researchers read a sealed letter without ever opening it, thanks to X-ray scans and algorithms that virtually unfolded the paper.

LED lights allow photographers to capture various images of the same manuscript in different colors, which are then combined with computer software into a single, highly detailed image. (Credit: Chloe Sharrock/MYOP)

Despite scholars’ best efforts to revive ancient literature, digitized texts can’t necessarily keep up with modern shifts between multimedia formats. If an institution fails to convert media from, say, a VHS tape to more recent formats, it could be lost forever. In fact, the 2011 Saint Catherine’s project was primarily intended to ensure ongoing access to the library’s materials, Grappone says. Their work follows past photography efforts by the U.S. Library of Congress and the National Library of Israel that began in the 1950s and were initially stored on microfilm, which can deteriorate over time and has largely fallen out of favor.

We can perhaps all benefit from the insights lingering within the monastery’s manuscripts, which contains some of the oldest written words and offers an intimate look into the human experience as early as the fourth century A.D. “We really need to understand where we came from,” Grappone says. “Maybe you want to do a little bit more to make sure that people five or six centuries from now have something to reflect on.”