High-Ranking Male Primates Keep Wafting Their Sex Stink at Females, Who Hate It 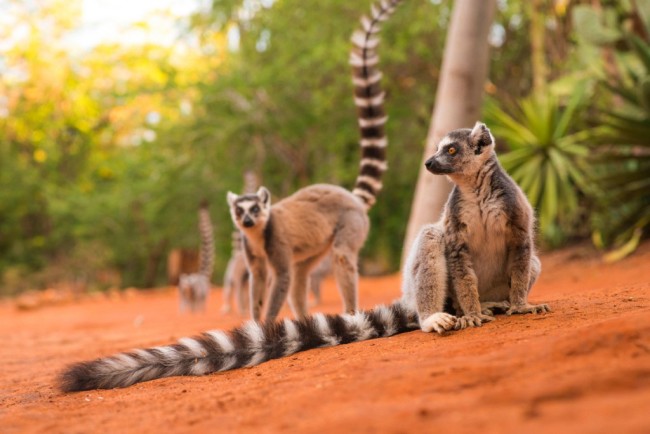 Researchers call it "stink flirting." A male ring-tailed lemur rubs his signature scent onto his long, fluffy tail, then waves it over his head in the direction of a nearby female. Males seem to intend this gesture as a sexual overture. But it often gets them into fights—with lemurs of both sexes. In fact, scientists aren't sure stink flirting helps male lemurs at all. Smell is an important communication tool for ring-tailed lemurs (Lemur catta). Both males and females have scent glands on their genitals that they use to mark their territory. Male lemurs have extra scent glands on their chests and wrists, which make different smelly secretions the lemurs use or combine for different purposes. Sometimes male lemurs rub secretions from their chest and wrist glands into their tail fur. Then they may wave their tails at other male lemurs—something researchers call a "stink fight." In this case the tail-waving is an "aggressive act," write Amber Walker-Bolton of the University of Toronto and Joyce Parga of California State University, Los Angeles. But at other times, male lemurs wave their stink-ified tails at females instead. "When males signal to females in this way, they gaze directly at the receiving female, often in close proximity," the authors write. Stink flirting hasn't been studied as much as stink fighting has, so the researchers went to a nature preserve near the southern tip of Madagascar to investigate. The scientists observed two groups of wild lemurs, as well as two outsider males who were trying to join one of the groups. Although females rule ring-tailed lemur society, the researchers saw that the social rank of males mattered: higher-ranking males did more stink flirting. This flirting came at a cost. While regular scent marking rarely got males in trouble, waving their stinky tails at females was met with aggression more than half of the time. That aggression usually came from the female lemur who got waved at. Walker-Bolton and Parga think stink flirting may be an "honest signal," a way for a male animal to show a female he has good genes to give her offspring. If males can afford costly displays—giant horns or tails that weigh them down; smelly signals that get them into fights—then they'll be healthy mates, the logic goes. But for lemurs, that costly signal doesn't have an obvious benefit. The researchers didn't find evidence that stink-flirting males got to mate any more often. The researchers may have missed some sneaky mating events, they say. However, females seemed more likely to make "sexual presentations" to males who had waved stinky tails in their direction. These presentations are a prelude to mating. So—even if it chagrins most other animals around them—males may find it worthwhile to keep making smelly displays. Image: Devin Sturgeon