Replicating the structure of a chicken's eye could lead to advances in light sensors. 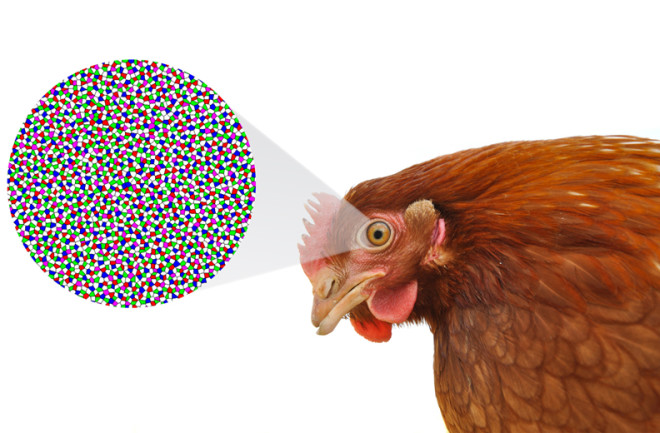 The distribution of cones in a chicken's eye (above) belies a unique and layered hidden architecture. | From left: Joseph Corbo and Timothy Lau, Washington University; Gabor Kecskemeti/Thinkstock

Up close, many systems look chaotic — clusters of stars, the atoms in superfluid helium, the haphazard arrangement of certain subatomic particles. Zoom out, though, and they appear organized. They possess a “hidden order,” says Salvatore Torquato, a Princeton theoretical scientist who discovered this phenomenon a decade ago, calling it “hyperuniform and disordered.”

Recently, neuroscientist Joseph Corbo of Washington University in St. Louis came to Torquato with a biological puzzle. In their beady eyes, chickens have five kinds of cones — cells that help perceive color (humans have three) — tightly packed into a small space. Corbo wondered why the cells were ordered, but not perfectly ordered. What was he missing? Together, he and Torquato found, the cones’ tight arrangement is actually hyperuniform and disordered. “However,” says Torquato, “it also came with a twist.”

When Torquato looked at just one kind of cone at a time, he found these, too, had a hyperuniform, disordered arrangement. There was a hidden order within the hidden order. This “multi-hyperuniform” and disordered scheme is an arrangement of matter never before seen in biology. It’s actually an example of evolution bumping up against the limits of physics: Ideally, the cones would evolve into a perfect pattern, but without enough room in the eye, they have to do the best they can.

It also might not be that unique. Corbo believes if we look a little closer, the eyes of other birds or even other kinds of animals will reveal a similar multi-hyperuniform structure. (There’s nothing particularly special about chicken vision, after all.) But understanding and re-creating the chicken eye’s organizational scheme could lead to applications for cameras, scanning equipment and other detectors — machines that, like any biological eye, should pick up some kinds of light and not others.

[This article originally appeared in print as "Cock-a-Doodle View."]