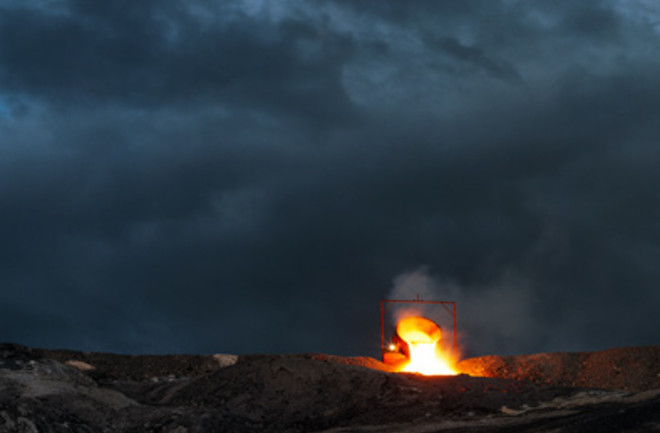 THE MOMENT Molten slag is added to a heap near Monsanto’s phosphate processing plant in Soda Springs, Idaho. The slag, which typically includes some radioactive uranium and radium in addition to calcium minerals, is the waste product from the conversion of phosphate ore to phosphorus. Monsanto operates the only such plant in the United States and uses the phosphorus to produce glyphosate, the main ingredient in the herbicide Roundup. According to the EPA, each pound of phosphorus produced generates about four pounds of slag. Monsanto’s Soda Springs plant produces more than 200 million pounds of phosphorus each year.

THE SHOT Photograph by Tom Fowlks using a Horseman LS with a Schneider 240mm lens. Watching one truck after another pull up to dump the slag cauldrons was “hypnotic and surreal,” he says.