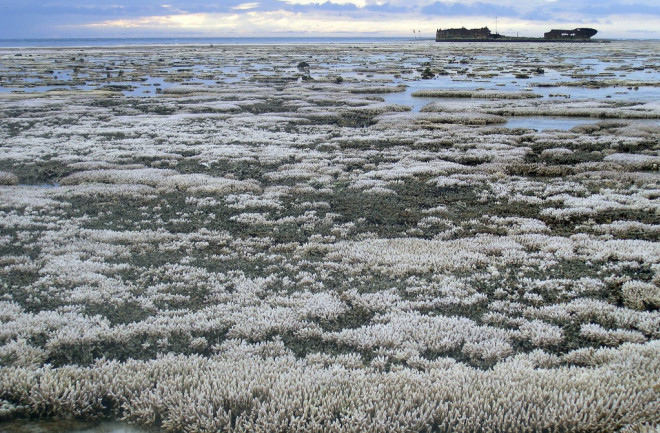 An example of a bleaching event on the Great Barrier Reef. (Credit: Oregon State University) Long-term stress may trigger herpes outbreaks in humans, and the same could be true in the Great Barrier Reef. While examining samples taken from the Great Barrier Reef in Australia, researchers from Oregon State University happened to observe coral as it went through a bleaching event. The team noticed that viral populations on the coral multiplied after samples had turned white. One of viruses described by researchers in the journal Frontiers in Microbiology  is morphologically similar to the herpes virus that affects humans and other animals. The study serves as evidence of another potential threat to an ecosystem that is already hanging in the balance.

Brightly colored algae and coral form a mutually beneficial relationship in the ocean. The coral provides algae with a safe environment and compounds needed for photosynthesis. In return, the algae produce oxygen and help the coral remove wastes. Bleaching occurs when beneficial algae are forced out by factors that aren't entirely understood. The bleaching process slows down the growth rate of coral, and can be fatal if it progresses long enough. The world's oceans are currently undergoing the third recorded global bleaching event, according to the NOAA. The last such event occurred just two years ago — a sign that bleaching events are becoming more common. Coral reefs are particularly vulnerable to environmental changes. Rising ocean temperatures, pollution, ocean acidification, rainfall changes, exposure to ultraviolet light and viral outbreaks are all thought to affect coral reef health. Viruses are the most abundant biological entity in the ocean, and finding them in a coral colony isn't surprising. However, during their observation period, researchers detected virus levels two to four times higher than any level previously recorded.

Researchers identified retroviruses and megaviruses in their samples. A virus similar to herpes was particularly abundant. Herpes viruses are are found in a wide range of mammals, marine invertebrates, oysters, corals and other animals. And although herpes viruses may belong to the same family, the strains that affect corals don't necessarily affect humans. The key finding, said co-author Rebecca Vega-Thurber, is that bleaching events are correlated with viral outbreaks, something that was previously unknown. What remains a mystery is whether these viral outbreaks caused the bleaching event, were a symptom of it, or if both events occurred simultaneously. "This research suggests that viral infection could be an important part of the problem that until now has been undocumented and has received very little attention," Rebecca Vega-Thurber, an assistant professor of microbiology in Oregon State's College of Science, said in a news release Wednesday.