Heroes in a half-shell show how turtles evolved

Clad in hard, armoured shells, turtles have a unique body plan unlike that of any other animal. Their shells have clearly served them well and the basic structure has gone largely unchanged since the time of the dinosaurs. But this unchanging nature poses a problem for anyone trying to understand how they evolved and until now, fossil turtles haven't provided any clues. All of them, just like their living descendants, have fully formed two-part shells. 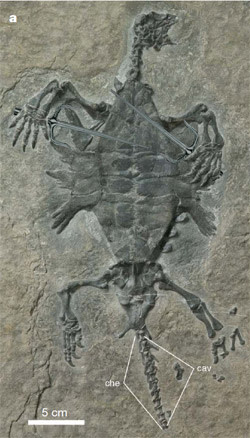 But three stunning new fossils are very different. They belong to the oldest turtle ever discovered, which lived about 220 million years ago in the area that would become China. Unlike today's species, its mouth had a full complement of small, peg-like teeth but even more amazingly, it had a feature that distinguishes it from any other turtle, either living or extinct - it only had half a shell.

The ancient turtle was unearthed by Chun Li (no, not that one) from the Chinese Academy of Sciences, who called it Odontochelys semitestacea, a name that literally means "toothed turtle in a half-shell". It was a small animal, just 35 cm from snout to tail, and its shell consisted of just a plastron (the bottom half) and not a carapace (the top half).

Li's team believes that this incomplete shell represents an intermediate step along the evolutionary path to the modern version. To them, Odontochelys's anatomy settles debates about how the group's distinctive shell evolved, which animals they were most closely related to and what sort of lifestyles the earliest members had. It's a true hero in a half-shell.

For a start, Odontochelys suggests that the shell was a two-step innovation, with the plastron evolving first and the carapace coming later. In a way, modern turtles replay the evolutionary history of their ancestors as their embryos mature, for the plates of their plastron harden before those of their carapace. Some scientists have used this sequence to argue that the turtles evolved a lower shell before an upper one, and Odontochelys provides strong support for this theory.

The animal also has structures that look like the very earliest stages of carapace evolution. Its upper body may have been uncovered but its upper ribs had started to expand, and its backbone had bony outgrowths at its flanks called neural plates. Li thinks that the widening ribs would eventually merge with each other, and the neural plates, to complete the second half of the distinctive shell. Again, turtle embryos do the same thing as they grow, accomplishing in mere months what their entire lineage took millions of years to do.

Scientists have put forward other theories for the evolution of the carapace. According to one alternative, it evolved from bony scales called osteoderms, which lie just beneath the skin. They are found in many reptiles and are responsible for both the distinctive plated look of crocodiles and the formidable armour of the ankylosaurian dinosaurs. Some say that turtle shells are merely very large osteoderms that fused together over the course of evolution, but Odontochelys consigns that theory to the shredder. Its remains show no signs of any osteoderms. 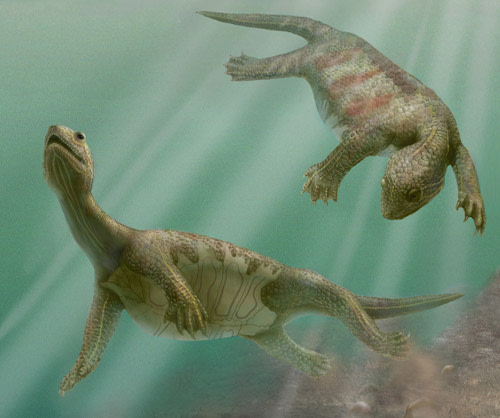 In this way, the new find settles debates that no previous turtle fossil could. Proganochelys, the animal formerly known as the world's earliest turtle, lived 10 million years after Odontochelys. It, however, did have a fully-formed shell and a massive, spiky one at that. In this way, it was of no use in piecing together the shell's origins and may actually have led scientists down some wrong alleys.

Proganochelys does have possible osteoderms in its legs and some camps used these, along with other features, to suggest that the turtle lineage splintered off from a group of extinct armoured reptiles called pareiasaurs. But according to Li, Odontochelys's bones suggest that turtles were more closely related to another reptile group - the diapsids, which include modern snakes, lizards and crocodiles.

The bones of its foot also suggest that it had reached a stage in development that only adult turtles get to, ruling out the possibility that the three Odontochelys fossils were teenage specimens whose shells simply hadn't finished growing. But whether it truly represented the ancestral turtle body is a more open question.

Li certainly thinks so, but others are less convinced. In a related editorial, Robert Reisz and Jason Head from the University of Toronto argue that the fossil could equally represent a turtle that did have a carapace, but one that hadn't hardened into bone yet. Their view is that Odontochelys is a more advanced species than Li suggests and its carapace had been reduced into an incomplete, softer version, in the style of modern soft-shelled turtles. That would make it an adaptation rather than a primitive state.

Both sides agree that Odontochelys's protected underside, and the size of its front legs, suggest that it spent a lot of time in water (although probably not in sewers). After all, land reptiles would have a greater need to protect their backs than their ground-hugging bellies. But in Li's view, this means that turtles probably evolved from an aquatic ancestor, while to Reisz and Head, it means that Odontochelys evolved from a land-lubbing ancestor and was one of the first turtles to adapt to a watery life.

For now, it's an open question, but either way, Odontochelys is a wonderful example of a 'transitional fossil'. I've blogged about similardiscoveriesbefore and they are always great cause for excitement, providing vivid illustrations of the evolutionary past of today's species. What they can't do of course if tell us if Odontochelys led, did machines, was cool but crude, or was, in fact, a party dude.

Image: from Nature; fossil altered by me

More from Not Exactly Rocket Science: