Hermit Crab Moves Inside a Living Sea Anemone, Using It Like a Shell 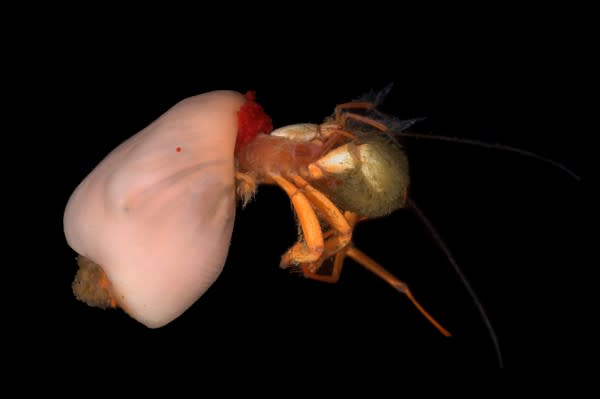 The naked tail of a hermit crab is a flaccid, unsexy, and vulnerable thing. When a snail shell of the right size is nowhere to be found, the hermit crab's gotta do what's it gotta do, which in this case is living inside a sea anemone. Hermit crabs will often place anemones on their shells---the anemone's stinging tentacles keep away predators and it gets to hitch a ride while feeding on food particles the crab misses. That's probably how this started. But when the crab outgrew its small snail shell, the anemone grew to cover both shell and crab. Greg Rouse and colleagues found this critter during an expedition off the coast of Costa Rica in 2010. The area is lacking in large snail shells, says Dr. Rouse, and there has been a previous report of this species, Parapagurus foraminosus, covered by an anemone.