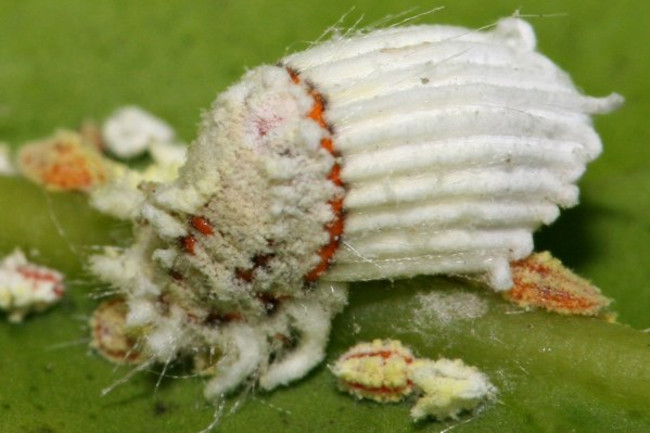 The life of the cottony cushion scale insect reads like something from the most ridiculous of tabloid newspapers. Dad leaves parasitic body parts in his own daughter, which produce sperm that fertilise her eggs. He is both father and grandfather to his own grandchildren. On top of that, these insects are mostly hermaphrodites. With the exception of the odd pure male, almost every individual is both male and female. They reproduce by having sex with themselves, fertilising their own eggs with their own sperm. And this means that scale insects can be father, mother, grandfather and grandmother to all of their grandchildren. Good luck drawing that family tree. Scale insects are small animals that suck on plant sap for a living. Encased in bizarre waxy shells, most people wouldn’t even recognise them as insects – the cottony cushion scale, for example, looks like a dollop of shaving foam. It and two of its close relatives are the only known hermaphrodites out of several millions of insect species. In most hermaphroditic animals, an individual grows up and develops the organs that make both sperm and eggs. But that’s not the case for the cottony cushion scale. When it mates with itself, it fertilises its own egg with its own sperm. Then, after the point of conception, yet more sperm invades the embryo. This “infectious tissue” creates sperm-producing organs inside the daughter* and the resulting sperm eventually fertilises the daughter’s eggs. (A note on terminology: obviously, each insect is hermaphrodite but they’re referred to as “daughters” because they have the body of a female. The rare pure males look very different.) How did this bizarre sexual system evolve? In 2009, Benjamin Normark suggested that it’s the result of a battle of the sexes. He envisioned a time when males and females were separate entities. When males gained the ability to infect their daughters with “parasitic” sperm, they could fertilise the eggs of multiple generations. This trait spread until the parasitic tissue became the norm, and true males all but disappeared. Normark assumed that the infectious sperm would be parasitic, that it would always benefit the male lineage at the expense of the daughters’ health or reproductive ability. That’s a reasonable assumption, given the sexual conflicts that rage in other insects – many species produce sperm that do harm females or even shorten their lives. But Andy Gardner and Laura Ross from the University of Oxford think that there’s more to the evolution of the scale insect’s sex life than males versus females. They developed a mathematical model to simulate these sexual conflicts among ancestral scale insects where the sexes were still separate. The model accounts for the fact that daughters aren’t infected with any old parasitic tissue – it comes from their “father”, and carries many of the same genes that they have. As such, there’s potential for them to cooperate, rather than compete. Their model predicts that when this odd tactic first evolved, the infectious tissue would probably have harmed the females in some way, who would have adapted to suppress it. In fact, if the harms were high enough, the infectious tissue would probably have evolved to suppress itself – its genes would have had a higher chance of reaching the next generation if it let the daughter get on with things herself and mate with a true male. Over time, this conflict would have weakened. The infectious tissue would have become more common, and inflicted less harm upon the females. Eventually, daughters would actually benefit from being fertilised by dad’s sperm. At some time, there would have been a tipping point when conflict gave way to collaboration. Females would pass on more of their own genes to the next generation if they mate with their own parasitic fathers rather than with other males. Normal males started to disappear and the hermaphrodites took over. Rather than existing as a distinct sex, males turned into a lineage of parasitic tissue, passed down from one daughter to the next. There is a final twist to this tale: Gardner and Ross think that the scale insects carry a passenger that could have quickened the demise of the males – a bacterium. Many insects carry helpful bacteria that provide them with important nutrients, and the cottony cushion scale is no different. These bacteria can often be found in tight clusters around the infectious tissue, and if they are killed with antibiotics, females are more likely to produce sons. To Gardner and Ross, this suggests that the bacteria could help to protect the infectious tissue from being destroyed. Why? Because the bacteria are passed down from mother to daughter. Males are a dead-end to them. In this regard, their “interests” are the same as those of the infectious tissue. Sons are a dead-end; daughters provide vessels that sail into the next generation. Reference: Gardner & Ross. 2011. The evolution of hermaphroditism by an infectious male-derived cell lineage: an inclusive-fitness analysis. American Naturalist citation tbc Photo by P. Hollinger More bizarre animal sex: