Having a 'Bird Brain' Is Actually a Compliment 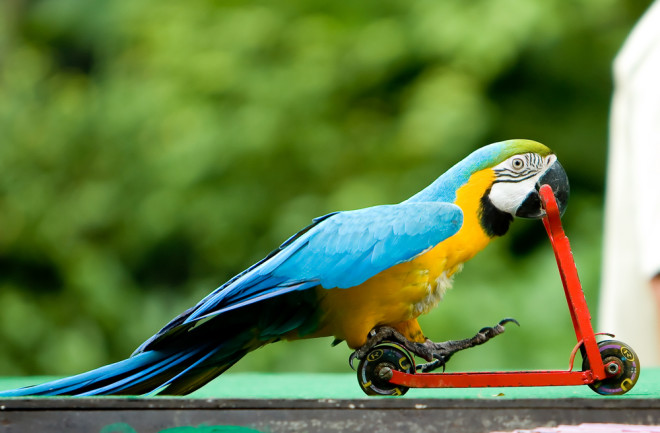 (Credit: Natthawat Wongrat/Shutterstock) Calling a person a birdbrain isn't the insult to intelligence it used to be. Sure, bird brains are small, but, according to a new study, their surprising intellect might arise from packing more neural connections into a smaller package. Some birds excel at tasks believed to require "higher thought," such as planning for the future, using tools and recognizing themselves in mirrors. Birds accomplish these challenges at a level that matches or exceeds primates' problem-solving skills, despite having brains that are several times smaller. Researchers in the past suggested that bird brains are wired in a completely different way than primates', a theory that was disproved two years ago in a study examining pigeon brains. Instead, birds might be living proof that big things come in small packages.

Rather than working with brains that are organized differently, researchers from Vanderbilt University believe birds simply pack more neurons into a smaller space than primates. The researchers analyzed brains from 28 different bird species and found that parrot and songbird brains are especially dense in the forebrain region, which is typically associated with more complex activities. Compared to primate brains of similar size, these birds have twice as many neurons and display more connectivity between them. In other words, researchers suggest that bird brains may provide "much higher 'cognitive power' per unit mass than do mammalian brains."

In their investigation, researchers targeted the pallium, a structure in bird brains that's analogous to the mammalian cerebral cortex. In mammals, larger neurons help connect far-away brain regions, but at the cost of density. Birds get around this trade-off by keeping most of their neurons close together, and growing a select number of larger neurons to handle long-distance communication. "In designing brains, nature has two parameters it can play with: the size and number of neurons and the distribution of neurons across different brain centers," lead author Suzana Herculano-Houzel said in a news release. "And in birds we find that nature has used both of them." They published their findings Monday in the journal Proceedings of the National Academy of Sciences.  While a direct link between neuron count and cognitive ability has not been established, this study provides a plausible explanation for some birds' uncanny intelligence. The evolutionary roots of birds' denser brains, though, remain unclear — it could have been a way for birds to keep their weight down so they could fly better, or simply an example of divergent evolution.