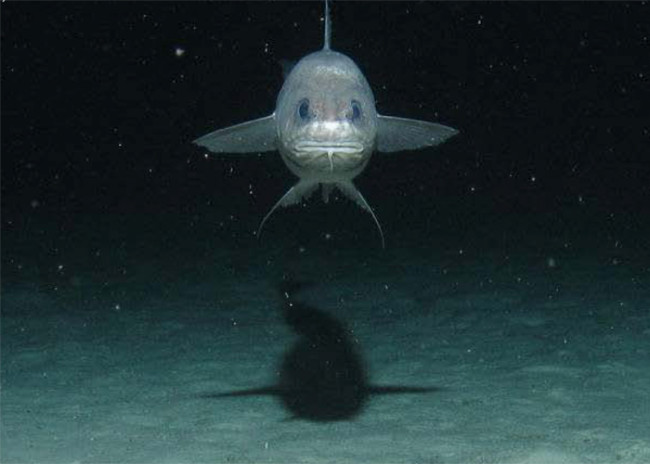 An Abyssal Grenadier smiles for the camera at 4800 meters depth in the Porcupine Abyssal Plain. (Image: WHOI/NSF) The deep sea is a mysterious world of darkness, an inky black expanse of water descending thousands of meters into geological fissures. But recently, several research expeditions have forayed into the trenches, providing a view - spatially and temporally limited as it may be - into the least known habitats on Earth. Alan Jamieson, a Senior Lecturer at the University of Aberdeen, has been involved in many of these efforts, using baited camera landers to examine some of the oceans’ 38 distinct habitats that extend below 6000 meters depth. He compares these deep-sea canyons to inverted mountains - isolated zones where unique organisms may develop far from the genetic influence of incoming individuals. Jamieson and other researchers want to see just how distinct each habitat is, but given the remoteness, depth, and sizes of the sites, it’s not so easy to have a look around and catalog different species. At the Deep Sea Biology Symposium in Aveiro, Portugal last week, Jamieson provided a guided tour of the trenches. The tools of the trade are typically autonomous, camera-outfitted platforms that work something like this: a dead fish is strapped to a metal scaffold and sent to the bottom of a trench. As fish, eels, shrimp, and other alien species come in for the free buffet, the lights go up and cameras capture the scene. With time, the next level of predators come in, drawn by the unusually high density of prey; if you’re lucky, multiple trophic levels can show up in the same frame. Over the course of several years, Jamieson and the consortium of scientists comprising the HADES team have conducted 188 lander deployments at several different sites across multiple ocean basins. This geographically dispersed effort has given Jamieson an appreciation for the entire hadal system, setting him apart in some ways from the superlative seekers who target the bottom of the Mariana Trench because it’s the ocean’s deepest point. “How much would you learn about mountain ecology,” he asks by way of analogy, “if you only studied the top of Mt. Everest? It's bizarre that we still do this, this obsession with the deepest point." For example, when comparing species from the Mariana and Kermadec Trenches in the South Pacific with those from the Puerto Rico Trench, some of the same amphipods (think slightly squishy crustaceans) were found at all three sites. This is remarkable - these creatures are finely attuned to the deep-sea habitat, and yet they seem able to hop thousands of kilometers between watering holes, as it were. Whether this happens by riding natural ocean currents or is dependent upon global ship traffic is currently unknown. [iframe width="560" height="315" src="https://www.youtube.com/embed/6N4xmNGeCVU"] Late last year, the team released a highlight reel of trench biology, above. There are balletic shrimp, cartoonishly proportioned eels, and the deepest fish yet observed, a snailfish cruising by at 8,145 meters depth. The conspicuous lack of bony fish below the ~8000 meter mark is something the HADES team is investigating further. Is it a random number that will be disproven with more observations, or is this a meaningful boundary, possibly an evolutionary remnant of a past epoch when the oceans maxed out at that depth? “The more we look at it,” says Jamieson, “the more it looks like there’s something to it." The deepest parts of the oceans also provide a distressing reminder of the globalized reach of anthropogenic influences. PCB plasticizers were found in the Mariana and Kermadec Trenches, and concentrations of the flame retardant PBDE in amphipods were surprisingly high. “These areas are every bit as polluted as if we would look 50 meters off the coast,” Jamieson reports, “which is quite sad.” The ocean’s depths may not be entirely pristine any more, but they remain alluringly mysterious. “Every time you land on the bottom,” Jamieson says, “it’s like landing on another planet."