Hamsters Are Happier When They Have Toys 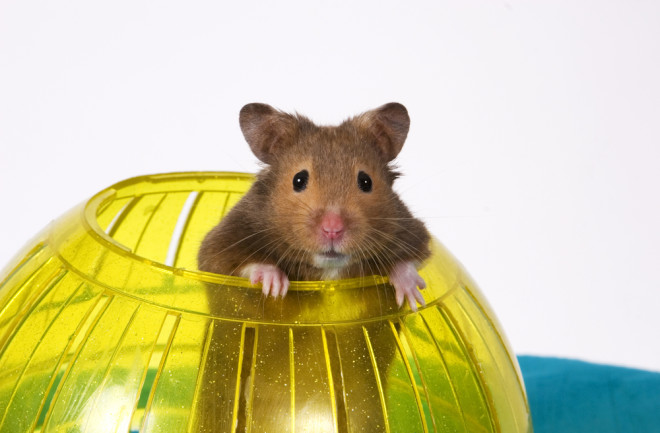 From networks of tubes to running wheels and plastic balls, pet hamsters get all the best accessories. And, it turns out, they probably appreciate it.

A new study has found that hamsters with enriched living conditions – including cushy bedding, chewing sticks, and hiding places – are more optimistic and probably happier.

Biologist Emily Bethell at Liverpool John Moores University and her colleagues wanted to test whether comfier living conditions would boost hamsters’ emotional states. It’s impossible to say what a hamster is actually feeling, but they, like other animals, definitely have emotional states that researchers can measure indirectly.

For the experiment, Bethell and her colleagues gave all her hamsters an initial taste of luxury: a cushy layer of aspen chips, two plastic hamster huts, a tiny hamster hammock, a wooden ledge, and a quiet plastic wheel with a solid floor. They also threw in four gnawing sticks for the hamsters to enjoy.

The researchers gave the hamsters a week to get used to their nice lifestyle, then changed things up. Half of the hamsters had a few more bonus items added to their cages. The other half reverted back to the default for lab hamsters: a thin layer of chips, a squeaky metal wheel, and a pair of cardboard tubes. After a few days, they switched.

The question that researchers wanted to answer, then, was what effect these housing conditions had had on the animals.

For the hamsters, the ambiguity came from a new drinking tube. In the weeks leading up to the experiment, the hamsters had been provided two tubes: one held sweet, delicious sugar water, while on the other of the enclosure, the other held an unpalatable liquid called quinine hydrochloride. Quickly the hamsters learned to drink from just the tasty water tube.

Then, Bethell and her colleagues replaced the familiar tubes with a third option, somewhere between the other two tubes. Would hamsters approach the new tube, assuming it held sugar water (optimistic) or avoid it because it probably held something unpalatable (pessimistic)?

It turned out that hamsters that had spent the prior week in an enriched cage were more likely to approach the empty drinking tubes than those who had their enrichment taken away. The results were published this week in the open-access journal Royal Society Open Science.

Living in the Lab

This is an interesting insight for pet owners, but Bethell’s primary motivation is the welfare of laboratory animals. “I notice in the students, more and more, they’re concerned about conservation and animal welfare, and I think this is really a great thing in the next generation of not just young scientists but young people in general,” Bethell said.

And it has as much to do with pragmatism as with ethics. If research animals behave differently because of negative emotional states, that could complicate some studies of behavior and cognition.

What Do Hamsters Feel?

It’s also not clear what the baseline emotional state for a hamster is. Are lab hamsters depressed or discontented, so that enriched housing boosts them up to normal levels of contentment? Or are lab hamsters mostly content, so that enriched housing makes them especially happy? Comparing judgement bias tests with other types of behavioral testing could help researchers understand better.

And according to Bethell, it’s remarkable that researchers are testing animals’ emotional states at all. “I think it’s interesting now that we can publish articles with terms like positive and emotion and that it’s possible now to study these kinds of topics in a serious scientific way,” she said. “I think it’s really great that the debate about welfare has opened up, and it has real scientific credibility now.”