I’ve got a story out in Nature News about an “electronic skin” that can monitor a person’s heartbeat, brain activity, muscle contractions and more, without the need for bulky conventional electronics. It’s no thicker than a human hair and can be applied as easily as a temporary tattoo. It sticks without the need for any glue, and can flex and stretch without breaking. It’s an amazing piece of technology. Go to Nature to read the full story. Meanwhile, I’m posting the full (lightly edited) transcript of my chat with John Rogers from the University of Illinois at Urbana-Champaign, who led the development of the electronic skin. He said a lot of interesting stuff that didn’t make it into the final piece and really gets across the many potential applications of the device. Why did you try and design an electronic skin? It’s a natural progression of the flexible electronics that we’ve been working on for years. The origins of our work date back 15 years almost. We previously looked at cardiac devices and brain imaging devices that mount on the internal tissues of the body. I’m a material scientist and skin is just an interesting material. The skin is the largest organ in the body and critically important. Mounting onto the skin has not only clinical and surgical relevance but it also has a level of consumer relevance in terms of sports or wellness that our internal devices did not. So it was a natural evolution of what we’ve been doing. We’ve gone from flexible to stretchable and now to tissue-like. This last technology is a key one because it provides capabilities that are completely absent from conventional approaches. And the requirements are quite demanding. Skin is time-dependent in ways that the internal organs are not, it’s a complex layered structure, it serves many different functions, and its mechanical properties are unusual. It formed the basis for a number of interesting fundamental science questions. What do you mean by time-dependent? The cells of the skin are always exfoliating so if you look at the skin in cross-section, it’s a number of different distinct layers. It forms a cellular escalator as cells migrate to the surface over time, terminating with a hard horny layer consisting of dead cells that eventually exfoliate off the surface. The time scale for that is around two weeks. Unless your device has an active or passive way of dealing with that, the mounting times will be in the order of days or a week. Can your device cope with that? It’s not been specifically designed to. We view it as something that goes on like a tattoo or a sticker and stays there for maybe a week. Then you peel it off and apply another one. In terms of future research, we’d like to embed in the device an active or passive strategy to accommodate that exfoliation process so that it can mount for a longer period of time.

There are a couple of really simple ideas. Conventional electronics are all built on the planar rigid surfaces of silicon wafers. The wafer is a brittle material, almost like a plate of glass in its mechanical properties. If you think about integrating electronics with the human body, there’s a real mismatch in terms of the mechanics and shape. You can’t change the biology so if you want integration, you have to reinvent the electronics so they look like biological tissue. We tended to stick with silicon rather than abandoning it. We wanted to see if we could configure its geometry and its layering in integrated circuits so that the overall mechanics of the system could match our biology even if the intrinsic properties of silicon will never be a good match. You can trick the system into looking like tissue even if it uses these tiny, rigid pieces of silicon. So there are two simple ideas. One is that a wafer is rigid and brittle and fragile – partly because of the properties of silicon and partly because it’s very thick, maybe half a millimetre thick. If you make anything thin enough, it becomes flexible just by virtue of bending stiffnesses that go down with the cube of thickness, and surface strains that go down linearly with thickness. If you think of going from a half-millimetre thickness to 50 nanometres, you’re talking of maybe 12 orders of magnitude reduction in the bending rigidity. At this scale, something that would otherwise be brittle is completely floppy. The other part of the puzzle is that the skin is not just flexible but stretchable like a rubber band. It has elasticity to it. Making silicon thin doesn’t make it elastic, but if you shape it into very narrow filamentary serpentine wires, you can imagine pulling on such a structure and the total resistance to the force is very low. Those are the two basic ideas. We have also used thin sheets of elastomer –a polymer that has a modulus [ 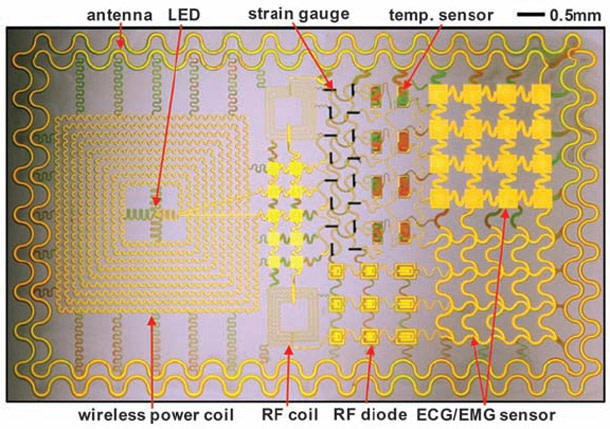 What is it about the patches that allows them to be flexible and resist the surface changes of the skin?

a measure of stiffness – Ed

] very closely matched to the skin. The overall system has the properties of the skin. How do you power the device? This is a good question. We present two possibilities in the paper. You can have inductive power. We have wireless inductive power coils on our electronics. If you bring a primary coil near the device, you inductively stimulate current flows. We show that with that kind of approach, you can light up LEDs and you can run electronics. You can also configure really tiny silicon solar cells into this skin-like format and although you can’t produce instantaneous levels of significant power, you can charge a supercapacitor or a battery. In the future, we hope to embed those into the system. Batteries are something we’re working on now. We’re also working on piezoelectric devices that can harvest power from the movements of the body. There are a lot of strategies you can imagine. Power supply is an area that will be fruitful for future work. Could you programme the device wirelessly? In principle, yes. You could upload data or software wirelessly using antenna structures that aren’t too much different from these inductive power coils. We demonstrated antennas and we demonstrated the building blocks for wireless communication – capacitors, high-speed transistors, and so on. All of these are pieces you would need but we didn’t integrate those pieces into a wireless communication component. That’s something we’re working on. You showed that the electronic skin can recognise voice commands and control a computer game if you put it on a person’s throat. If you didn’t have the device, what would you need to do to achieve the same thing? You would need a conventional electrode that’s used for EMG measurements – a bulky patch connected by a wire to more electronics. That sort of electrode typically sticks onto skin with an adhesive, sometimes with penetrating pins or conducting gel. For a location like the throat, people don’t want to wear such technology. We focused on the throat because it really highlights the mechanical invisibility of these epidermal electronics, even on a sensitive part of the body. If you look at the technology that is used by people who suffer from larynx diseases, they’re usually bulk devices that you press against the throat when you want to speak and take away again when you’re not speaking. Our hope was that this approach would allow you to put something on the skin of the throat and leave it there. That was our vision. We also demonstrated monitoring of heartbeats, muscle contractions in the forearm, and brain activity in the forehead. What other interesting applications are there? We like healthcare. There are a lot of non-healthcare applications as well but within my own group, we’re trying to look at what we can do to advance human health. Applications for monitoring premature babies and neonatal care are interesting. Babies don’t do well when they’re wired up to bulky patches so non-invasive monitoring devices have a lot of value. This technology could also be useful for human-machine interfaces through the throat for people with problems in their larynx, and more generally, prosthetic control for disabled people. It turns out that you can not only measure electrical properties but you can stimulate muscle contractions. So we have an active collaboration with physical therapists to use these devices to induce muscle contractions in regions of the body that have degenerated. There are many avenues for us to pursue. How much does one of these patches cost? I wouldn’t want to put a number on it. This is the first research demonstration of this technology so it involves a lot of discovery and research. The devices we’ve made right now are very expensive because the non-recurring engineering costs have not been recovered. But if you envision a manufacturing facility cranking these things out in tens of thousands, I’ve no reason to believe that they would be particularly expensive. Our strategy has been to try and build on developments that flow out of the traditional semiconductor industry and then adapt or morph them into new forms that allow these kinds of mechanical properties. We’re building on existing technology rather than reinventing them so I think the technical hurdles to commercial manufacture are lower than you’d ordinarily see in a brand new research paper describing a new technology. 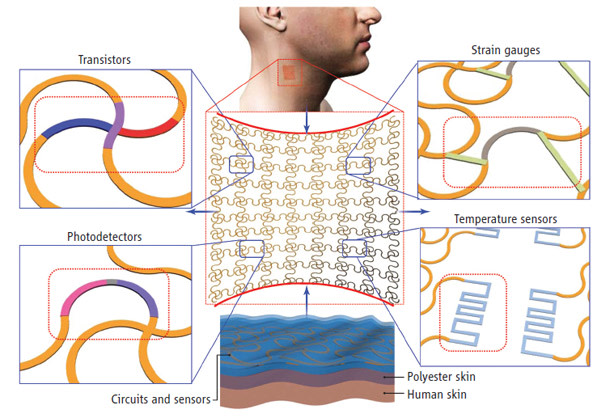