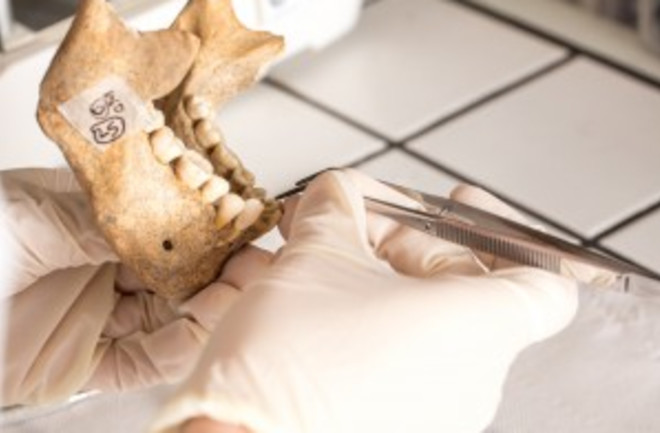 Teeth can tell researchers a lot about the past. (Credit: sruilk/shutterstock)

A new study of Neanderthal teeth published in Science Advances this week tells us new details about what life might have been like for early hominin children in a rapidly changing environment. It’s an unprecedented look into how our ancient cousins coped with harsh climate conditions and seasonal changes in resource availability.

Also among the findings was an unexpected discovery: the oldest documented exposure to lead among hominins.

“This study reports a major breakthrough in the reconstruction of ancient climates, a significant factor in human evolution, as temperature and precipitation cycles influenced the landscapes and food resources our ancestors relied on,” said the study’s lead author Tanya Smith, a biological anthropologist at Griffith University in Australia

An international research team analyzed the teeth of two Neanderthal children, known as specimens Payre 6 and Payre 336, who lived 250,000 years ago. The team also studied the tooth of an anatomically modern human child that lived 5,000 years ago. All the teeth originated from an archeological site in southeast France.

Similar to tree rings, teeth record information about diet, climate and evolutionary history. Children’s teeth are especially rich sources of information for researchers. During childhood, new teeth layers are formed almost daily, capturing important information about chemical exposure and other elements of their lifestyle. The researchers used lasers to sample these layers and reconstruct the past exposures using incremental growth markings observed in the teeth.

A 250,000-year-old Neanderthal tooth yields an unprecedented record of the seasons of birth, nursing, illness, and lead exposures over the first three years of this child’s life. (Credit: Tanya Smith & Daniel Green)

A 250,000-year-old Neanderthal tooth yields an unprecedented record of the seasons of birth, nursing, illness, and lead exposures over the first three years of this child’s life. (Credit: Tanya Smith & Daniel Green)

Researchers determined that one child was born in the spring and that they were weaned two and a half years later — which is similar to the length of time that modern humans in preindustrial societies nursed their offspring. This finding is also significant because it is consistent with the pattern of mammals giving birth to offspring during periods of increased food availability, as spring would likely have been for the Neanderthals.

Scientists think that periods of extreme cold and aridity helped humans replace Neanderthals in Europe, and this study helped flesh out how changes to the climate affected the Neanderthals on a developmental level. The team observed that the Neanderthal children endured more extreme seasons with greater temperature fluctuation than the modern human child included in the study. Both Neanderthal children had more stress lines in their enamel, suggesting they were more prone to illness in the winter months, and it backs up the theory that climate helped edge their species out.

Both Neanderthal children were also exposed to lead at least two times, and it’s the oldest documented exposure to lead among hominids. The researchers suspect the children may have consumed food or water contaminated with lead or that they inhaled lead from a fire.

Although the researchers say they cannot make broad generalizations due to the small study size, the research methods used may offer further opportunities to learn about Neanderthals.

“Our team plans to analyze more teeth from our ancestors and investigate how lead exposures may have affected their health and how that may relate to how our bodies respond to lead today,” said one of the study’s lead authors, Christine Austin, an assistant professor in environmental medicine and public health at the Icahn School of Medicine at Mount Sinai in a statement.