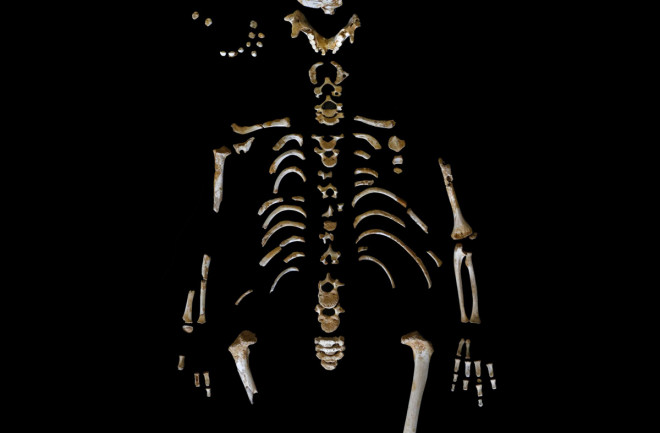 The remains of a Neanderthal boy who died 49,000 years ago is revealing information about the skeletal and physiological growth of our distant cousins. (Credit: Paleoanthropology Group MNCN-CSIC) Though his life was short — he never reached the age of 8 — his fossil remains could have far-reaching influence in hominin research. A paper to be published Friday in Science reveals the discovery of the well-preserved skeleton of a Neanderthal boy who lived in Spain 49,000 years ago. The researchers discuss the fits and starts of adolescent growth for our biological cousins, leading to insights into the evolutionary development of Homo sapiens. Dental evidence reveals that the boy was about seven and a half years old. His brain was 87 percent the size of a Neanderthal adult’s. At that same age, modern humans have a brain that is 95 percent the size of a human adult’s, indicating that the Neanderthal juvenile brain takes a longer time to reach size maturity. In addition, the boy’s spine grew slower than that of a modern human, who have comparable development by age 5 or 6. Even so, the fossil reveals plenty of overlap in body development with juvenile humans. “The general growth pattern was quite similar to our growth pattern,” says Antonio Rosas, chairman of the Paleoanthropology Group at Museo Nacional de Cienceas Naturales in Madrid, Spain, and coauthor of the paper. “We inherited this growth pattern from a common ancestor.” “We thought our way of growing was very unique for our species,” he continued, “but we realize now that this particular growth pattern is shared by different species.” A Formidable Frame Neanderthals, who died out 40,000 years ago, and Homo sapiens shared a common ancestor before taking separate evolutionary paths. Both are large brained (in fact, Neanderthals had a larger cranial capacity), but body form is quite different, with our cousins having a more robust skeletal frame. The longer period of brain and spine development in Neanderthals is due to their large body and physiology, Rosas says. The extended time should not be construed as a fundamental difference in growth pattern to that of modern humans. The boy was found in El Sidrón, a complex cave system in Asturias, Spain, that has given up the remains of seven adults and six children, all within the same Neanderthal group. Many appear to be kin, the paper says. Ancient DNA samples suggest the boy might have had an infant sibling. Both could be offspring of a young adult female also found in the cave. A skeletal examination suggests that the boy was 3 feet, 6 inches tall and weighed about 57 pounds — a formidable frame. He was generally healthy, Rosas says, though he endured a period of stunted growth, which can happen from deficiencies in nutrition. “He was starting to do daily activities,” Rosas says. And then he died. “No evidence of trauma or disease,” Rosas says. “Cause of death is unknown.” The researchers plan to also examine other remains of Neanderthal children in El Sidrón. “This will be the first step to get a bigger picture of the life cycle of Neanderthals,” Rosas says.