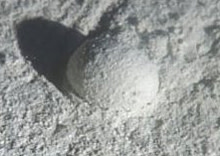 On the seafloor near the Bahamas, researchers have discovered a single-celled organism about the size of a grape, and they say the unusual organism raises interesting questions about the evolution of complex, multicellular animals. The oversized protists were found at the end of long, linear tracks that appear to have been made by the slowly rolling amoebas; lead researcher Mikhail Matz says the tracks resemble fossilized impressions from over 1 billion years ago, which scientists had assumed were made by multicellular worms.

"We were looking for pretty animals that have eyes, are coloured, or glow in the dark; instead, the most interesting find was the organism that was blind, brainless, and completely covered in mud," he said [BBC News].

The origin of multicellular life has been shrouded in mystery, because few animals fossils have been found that predate the beginning of the Cambrian Period around 542 million years ago.

Some researchers point to rare Precambrian "trace fossils" - such as slither prints left in ancient sea bottoms - as evidence for complex animal life predating the Cambrian. The oldest of these trace fossils yet found are 1.8 billion years old, about three times older than any animal in the fossil record [The Scientist].

However, the new tracks raise another possibility: that the ancient traces were created by large single-celled organisms. Researchers say the protists, which are named Gromia sphaerica, propel themselves with temporary protrusions called pseudopods.

The protists move very slowly, taking weeks or even months to make a track of a few centimetres. As the sea bed currents where they were observed are very slight, their tracks are not washed away [BBC News]

. But not everyone agrees with the conclusions drawn by the study, which will be published in December in

Palaeobiology expert Mary Droser argues that it is

unlikely that protozoan tracks made during the Early Cambrian would be preserved because there would probably have been extensive disturbance of the seabed by plants and animals. "However, the general assumption has been that these types of complex trace fossils had to have been made by [multicellular animals] because we had no evidence to the contrary," adds Droser. "We can't say this anymore. The story has gotten more interesting" [Nature News].