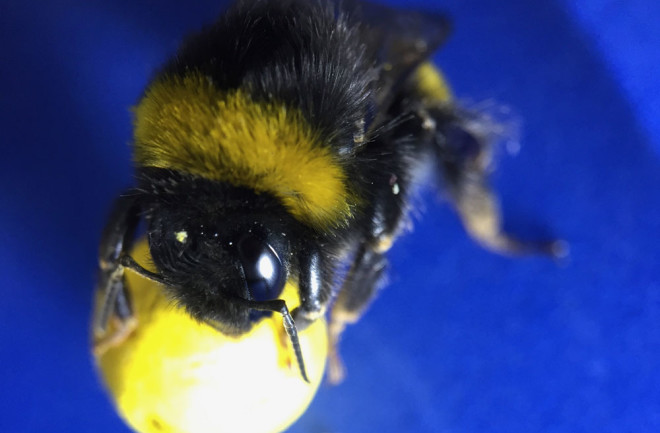 A bumble bee hard at work spinning a ball toward its goal. (Credit: Courtesy Clint Perry, Queen Mary University of London)If scoring a goal is the only way to earn a sugary treat, a bumblebee will summon its inner Messi. Indeed, rolling a ball into a goal—soccer, sort of—is the latest puzzle solved by Bombus terrestris

after training with scientists/bee trainers at Queen Mary University of London. In October, scientists from the same lab—the Chittka Lab—taught bees to tug strings for treats. There are no plans to start a traveling carnival; instead, scientists are pushing bees’ to their cognitive limits to learn how complex behaviors arise from minuscule brains.

“There’s no reason to believe that unique capacities of large-brained animals and humans aren’t actually available or present in a lot of other animals,” says Clint Perry, a Queen Mary researcher who studies the power of tiny brains. “Just because a bee has a small brain, it’s not limiting their capacity.”

When Chittka Lab behavioral ecologist Olli Loukola first endeavored to teach bees, he nearly gave up after two weeks of trying. But one day, it all came together for a bee and Loukola grabbed a colleague and said, “Come, I have trained my first bee.” Today, Loukola is a pro; he can train a bee in a day or two using sugar water, patience and fake bees. Bumblebee colonies in the Chittka Lab are connected to training arenas where researchers present bees with a task—in this case, a ball and a hole. Within 5 minutes, bees had to push the ball into the center of a platform to get a reward. Eventually, the task required them to put it in the hole. For stumped bees, Loukola deployed an artificial bee-on-a-stick to nudge the ball and demonstrate proper technique. The bees caught on.

A trainee gets a tip from a bee-on-a-stick. (Credit: Perry and Loukala, Queen Mary University of London) And training a bumblebee is an investment that pays dividends, because they’ll train others in the colony. A new skill sort of ripples through a colony. “They like to observe others, and they like to follow others in situations when they don’t know what to do,” says Loukola.

Bees that watched a trained bee spin balls for sugar learned the task faster. Researchers also swapped yellow balls with black balls and the bees finished the job regardless of the ball’s color. And when given a choice between three balls, bees chose the one nearest to the hole, even if their trainer bee chose the one farthest away. In other words, bees didn’t just copy their mentors, they generalized what they learned. Researchers reported their findings Thursday in the journal

Science. It’s an impressive feat, because there isn’t a flower that requires a bumble bee to turn its back and pull a ball into a hole to access its pollen. It isn't an instinctual behavior. “Just because an animal doesn’t do something, doesn’t mean it can’t. The ecological pressures just might not be there,” says Perry.

Perry wants to continue pushing bumblebees out of their comfort zone to stretch their abilities. He’s toying with the idea of a multi-step, vending machine setup. Bees would need to grab a token of some sort and drop it into a machine that would dispense an award in a different place. It’d be a way to separate the token location from the reward location, a subtle twist that makes the task all the more challenging. “Sometimes I think our heaviest limitations are our own cleverness in designing and miniaturizing some of these experiments to fit a bee,” says Perry. Eventually, Perry wants to look inside the bumblebee brain and see which circuits are needed to produce behaviors and understand how decisions are ultimately made. What sensory information does a bee rely on, and how is it processed in the brain? “We don’t know what’s going on in a bee’s head, what they are thinking or the information they are using. We’re starting to get at that with these types of experiments,” Perry said.

In 2014, scientists at the University of Queensland in Australia provided a glimpse into the mind of a bee by immersing it in virtual reality and monitoring its neural activity.

They tethered a bee in front of screens that displayed various scenes, and the bee stood atop a floating ball, which made it feel as if it could navigate the scenes. Researchers found that the bee’s brain activity predicted its subsequent behavior, an indication to researchers that bees “exercise active thought and attention.” While we don’t know if Perry has pushed bumble bees to their cognitive limit, they’ve already proven there’s a surprising amount of power in their tiny processors.