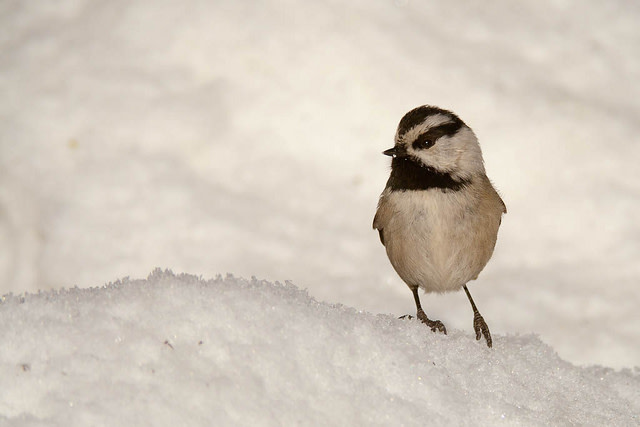 You won't see a chickadee shoveling out a parking space and claiming it with a folding chair, no matter how good your binoculars are. But birds, too, have to be resourceful when they live in inhospitable climates. Travel just 600 meters up a mountain, and you'll find chickadees vastly more clever than their peers living a more comfortable life below. How do you test the cleverness of birds? Using tubes with tasty worms inside, naturally. Biologists don't like to call animals "smart," though, so in this case they were testing the "problem-solving ability" of Poecile gambeli, the mountain chickadee. These songbirds live in the mountainous western United States, ranging from the low foothills to the peaks. Dovid Kozlovsky, a graduate student at the University of Nevada, Reno, and his coauthors wanted to compare a population of mountain chickadees from a higher elevation, where the weather is more severe, to one from a lower elevation. Earlier research had shown that mountain chickadees from harsher habitats had superior spatial memories. They were better at finding stored caches of food than chickadees from lower elevations. The higher-elevation birds also had larger hippocampi, an area of the brain involved with memory. In another study, black-capped chickadees (Poecile atricapillus) from Alaska proved themselves to be better problem-solvers than birds of the same species from Kansas. Kozlovsky captured 24 wild mountain chickadees in Truckee, California. Half were living at a lower elevation, about 1,800 meters. The other half lived way up at 2,400 meters. Of course, even the "low-elevation" birds in this study came from a home higher than Denver. But the higher elevation has even more severe, bitterly cold winters. The researchers used young birds that hadn't lived through a winter yet. This way, differences between the populations were more likely to come from their natural abilities and not their experiences. Each bird was presented with a puzzle. Inside its cage, it found a glass tube with a delicious waxworm inside. The tube was stoppered with cotton and clipped upside-down to the cage bars. To get the worm out, birds had to tug the cotton from the bottom of the tube and let the treat fall to the floor. Birds saw the apparatus for two trials each day: an hour in the morning and an hour in the afternoon. It took low-elevation birds an average of 9.5 of these trials—or five days of staring at the waxworm—before they pulled the cotton out. But high-elevation birds solved the puzzle in less than half the time. It took them only 3.5 trials, on average, to get the worm. The earlier study on black-capped chickadees had suggested that birds from harsher climates are less "neophobic," or scared of new things. This might help them dig their beaks and claws into a puzzle more quickly. But when Kozlovsky tested neophobia in his animals (using feeders in vivid orange, lime green, and pink hues), he didn't find any difference between the low-elevation and high-elevation birds. Chickadee populations that live with worse weather seem to have adapted by becoming better problem solvers. Birds that struggle with challenges might not survive the cold winter to reproduce. But for populations that live in gentler conditions, there's not as much pressure to be clever. Maybe that will be some reassurance the next time you're puzzling out how to remove an ice dam from your rain gutter.