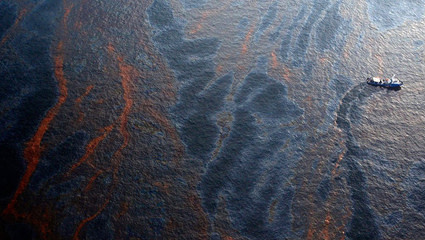 Oil wasn't the only thing seeping into the Gulf of Mexico after the Deepwater Horizon disaster. The explosion of BP's oil rig also triggered a leak a methane. From Ed Yong:

With the well unsealed, substantial amounts of the gas were released into the gulf. This plume of dissolved methane should have lurked in the water for years, hanging around like a massive planetary fart. But by August, it had disappeared. On three separate trips through the gulf, John Kessler from Texas A&M University couldn’t find any traces of the gas above background levels. He thinks he knows why – the methane was eaten by bacteria.

The gas pouring out of the broken well spurred the growth of bacteria called methanotrophs, which can break down methane as their only source of energy. They made short work of the gas. By the time that Kessler reached the gulf, just four months after the initial blowout, he found plenty of bacteria and precious little methane.

on this discovery at Not Exactly Rocket Science. As for BP itself: The petroleum giant now finds itself in the legal arena, but the company may avoid a worst-case scenario there. A presidential commission established to investigate the affair has found the brunt of liability to be BP's

, but also found the root cause of the disaster to be widespread, systematic mismanagement by everyone, and not rogue behavior by any one player. That is, BP will skate without being charged with "gross negligence" because everybody else made mistakes, too.

Commission co-chair William K Reilly said: "So a key question posed from the outset by this tragedy is, do we have a single company, BP, that blundered with fatal consequences, or a more pervasive problem of a complacent industry? Given the documented failings of both Transocean and Halliburton, both of which serve the offshore industry in virtually every ocean, I reluctantly conclude we have a system-wide problem." [The Guardian]