Gonna Have A Fungal Good Time [With Apologies to James Brown]

If yeast could sing, it might sound something like this. This single-celled fungus--for which we should give thanks for bread, beer, and wine--can reproduce in several ways. Most of the time, it produces buds that eventually split off as free-living cells of their own. Its daughters are identical to itself, carrying the same two sets of chromosomes. Sometimes, however, life get rough for yeast, and they respond by making spores, each with only one set of chromosomes. Later, when times get better, the spores can germinate. In some cases the yeast cells that emerge just grow and divide. But they can also have sex. One yeast cell merges with another one, combining their DNA to produce a new yeast cell with two sets of chromosomes. 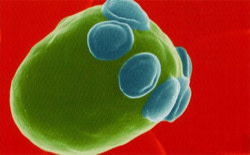 What makes yeast sex especially interesting is that the cells communicate with each other first. A yeast cell produces a pheromone that can cause another cell to stop dividing and start crawling towards the source of the signal. These pheromones divide yeasts into two groups. Yeast cells carry one of two genes for making pheromones and will only mate with yeast cells that produce the opposite type. But if you surround a yeast cell with a ring of pheromone producers, the yeast will not just pick a partner at random. It will exercise a choice. The cell will measure the pheromones coming from each suitor, and it will creep its way to the strongest source. Some scientists have suggested that natural selection favors this choice because it lets yeast be efficient about sex. Rather than creep a long way to find a mate, a yeast cell can just love the one it's with. But there are some problems with this explanation. First off, yeast make a lot of pheromones--much more than they would need simply to be detected. For another thing, yeast cells vary in how much pheromone they make. A strong pheromone maker will be more likely to attract a mate than a weak one that's closer. What's more, when a pheromone-producing yeast cell detects a signal from the opposite mating type, it cranks up its own signal. If you didn't know better, you might think yeast cells were trying to get some attention. In fact, some scientists think that yeast are doing exactly that. They argue that yeast cells release pheromones like a love song, in order to attract mates. Carl Smith and Duncan Greig, two evolutionary biologists at University College London, wondered if the same pressures drove the evolution of yeast pheromones that have driven the evolution of more familiar kinds of sexual displays, like peacock tails, frog croaks, and elk horns. According to one particularly influential hypothesis, the Handicap Principle, females could benefit from being choosy about mates if that choice led them to have more success reproducing. Of course, a male frog can't offer a female frog a DNA test documenting his good genes. So he needs some way of advertising his quality. A song or a horn or a fragrance are all possible ways to send this signal. The problem with this sort of communication is that it can be hacked. A weak male can, in theory, channel some extra energy into building a false sexual display. If some males start to cheat, females who are choosy will end up with no advantage over other females. Female choice will disappear, and male displays will vanish as well. Honesty is thus crucial to the evolution of sexual displays. And one way for displays to be honest is for them to be expensive. A weak male with fewer resources will have a harder time producing an expensive display than a strong one. In effect, a long-tailed widowbird is saying, "I've got so much to offer that I can waste a lot of energy on these magnificent tail feathers." To see if yeast were wooing each other with expensive signals, Smith and Greig disabled the genes in some cells so that they could not make pheromones. Then they compared how fast healthy and engineered yeast cells reproduced asexually. The quiet yeast grew far faster, the scientists found, presumably because they no longer had to use up a lot of energy making pheromones. This result confirmed a key prediction of the handicap principle: a signal has to be costly. In fact, yeasts can suffer a 30% drop in their viability by making pheromones. But some yeast pay a bigger price than others. Some strains of yeast Smith and Greig studied carried mutations that caused them to grow relatively slowly, while other cells could grow faster. Smith and Grieg found that when they disabled pheromone genes in low-quality yeast, the cells enjoyed a much bigger boost than high-quality yeast. In other words, making pheromones is a bigger sacrifice for low-quality cells than for high-quality ones. That difference could help ensure that pheromones remain an honest signal. Finally, the scientists compared how much pheromones each kind of yeast produced. They found that yeast of higher quality churned out more pheromones than yeast of lower quality. So a yeast that chooses to mate with a strong pheromone producer will be endowing its offspring with good genes. Smith and Greig's experiment makes me think about the yeast in a glass of wine in a different way: I now imagine an ocean of love songs. But it also makes me appreciate just how far-reaching Darwin's ideas about the evolution of sex have turned out to be. The same rules apply--to bird, frog, and fungus alike.