Glimpses of the Fourth Domain?

Charles Darwin pictured evolution as a grand tree, with the world's living species as its twigs. Scientists identify 10,000 new species a year, but they've got a long, long way to go before finding all of Earth's biodiversity. So far, they have identified 1.5 million species of animals, but there may be 7 million or more in total. Beyond the animal kingdom, our ignorance balloons. Scoop up some sea water or a cup of soil, and there will likely be thousands of new species of microbes lurking there. Fortunately, a lot of the species that scientists discover each year are fairly close relatives to species we already know about. There may be plenty of beetle species left to be discovered, for example, but they will all end up as tufts sprouting from the same beetle branch. Making matters more complicated is that the tree is, in some ways, more like a web. Genes sometimes slip from one species to another, especially among microbes. There are lots of ways this can happen. Viruses can ferry these genes from species to species; in other cases, microbes may just slurp up naked DNA. In the process, they blur genealogy. This can be a hard concept to grok, so let me offer a blogger's analogy. Let's say that Ed Yong and I meet up at a conference. We shake hands. Little do I know that Ed has perfected his Yong-o-matic Horizontal Gene Transfer Injector. A portion of his genes invade the skin on my hand, slip into my cells, and replace some of my own genes. Later, I decide to pay for a DNA ancestry test, curious to find out exactly where I come from. The tests come back, indicating that my ancestors are not, as I once thought, from Europe, but from China. It's not just individual genes that can slip from one species to another, either. On rare occasions, entire cells have merged together, creating entirely new kinds of life (like us). Cell fusions and horizontal gene transfer are probably best portrait by interconnected branches, rather than diverging ones. The base of the tree seems especially tangled, more like a mangrove rather than an oak. With all those caveats in mind, here's a rough picture of the tree of life that Norman Pace of the University of Colorado offered in a scientific review he published in 2009. It shows life divided up into three domains: eukaryotes (that's us), bacteria, and archaea. 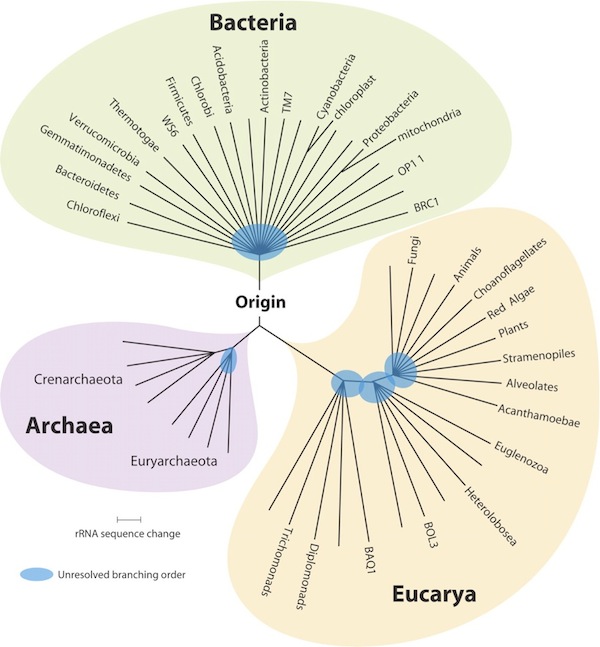 There's a lot of debate about whether eukaryotes actually split off from within the archaea, or just branched off from a common ancestor. Nevertheless, the two forms of life are quite distinct. For one thing, the common ancestor of living eukaryotes acquired oxygen-consuming bacteria that became a permanent part of their cells, called mitochondria. They're keeping you alive right now. A lot of scientists wonder how all the new species that scientists are discovering are going to change the shape of this tree. Will its three-part structure endure, with each part simply growing denser with new branches? Or have we been missing entire swaths of the tree of life? It's possible--but just possible at this point--that we have missed a big part of it. 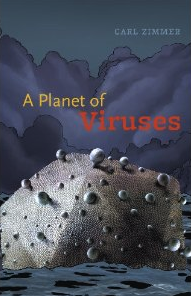 One clue came to light in December. A team of French scientists have been studying weird bunch of viruses officially called Nucleocytoplasmic Large DNA Viruses (NCLDV). I'm just going to call them giant viruses, because they are quite huge. Grotesquely so. As I write in my upcoming book, A Planet of Viruses, they were mistaken for years as bacteria. They were a hundred times bigger than any virus known at the time.. Giant viruses are indeed viruses, however. They hijack host cells the way all viruses do, for example. But giant viruses also explode a lot of conventional ideas of what viruses are supposed to be. Not only are giant viruses monstrously big, but they are overloaded with genes. A flu virus has just ten genes, for example, but a number of giant viruses have well over a thousand. Giant viruses even get infected by viruses of their own. For years, researchers have been finding that the diversity of genes in viruses is tremendous. It turns out that giant viruses are particularly bizarre, genetically speaking. Didier Raoult and his colleagues compared one set of genes in giant viruses to their counterparts in other lineages. Here's the evolutionary tree they came up with. (The giant virus genes are shown in red.) 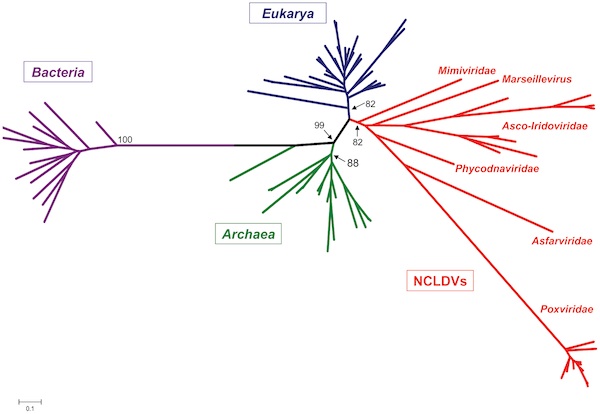 The genes are so different, the scientists argue, that giant viruses represent a fourth domain of life. Here's an impressionistic figure they created to show how the four domains emerged from the web of gene-trading early on in the history of life (from left to right, archaea, bacteria, eukaryotes, and giant viruses). 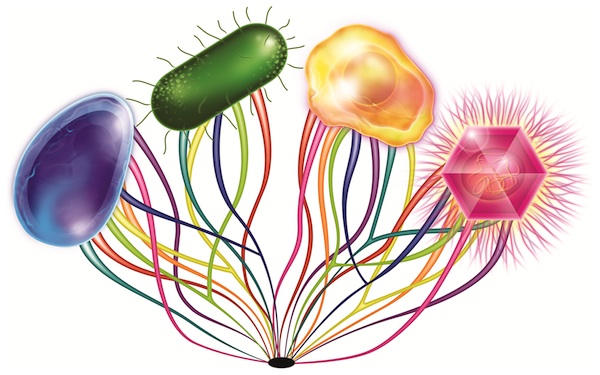 Today Jonathan Eisen of UC Davis and his colleagues publish still more evidence for a possible fourth domain. (Some of the evidence can be found in a paper in PLOS One; the rest is in a shorter note at PLOS Currents.) Their evidence comes from a voyage Craig Venter and his colleagues took in his yacht, scooping up sea water along the way. They ripped open the microbes in the water and pulled out all their genes. The advantage of this approach is that it allowed the scientists to amass a database of literally tens of millions of new genes. The downside was that they could only look at the isolated genes, rather than the living microbes from which they came. Eisen and his colleagues decided to compare the versions of a few genes that are found in all living things and are very useful for reconstructing evolutionary trees of the grandest scale. (The genes are called small subunit rRNA, recA, and rpoB). They found that a lot of the genes they analyzed belonged to species that are closely related to species that scientists already know about. But some are different. Very different. In fact, they represent some of the oldest branches on the tree of life. In this figure, for example, they compare versions of the RpoB gene in giant viruses (red), bacteria (purple), eukaryotes (blue), and archaea (green). Two branches that turned up in the global ocean survey are in cyan. Unknown 2 seems to be like the giant viruses, but Unknown 1 is just off the map. 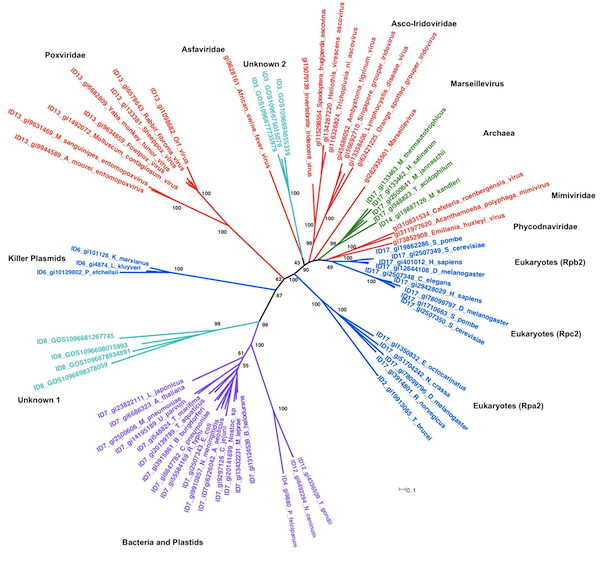 Eisen and his colleagues consider it possible that these genes come from a fourth domain. Analyzing the ancient history of genes is notoriously tricky, with lots of opportunities for spurious results to crop up, so this possibility might soon evaporate. But scientists have a number of tools at their disposal to test the results. In this case, the first order of business will be to find more of these exotic genes to see if they continue to fall into a distinct domain of their own. TIf they do, scientists will need to track down the actual organisms that carry them. Are they viruses, or are they true cells? That discovery might show how this possible fourth domain got its start. Did it start out as ordinary cellular life, and then some of its genes ended up in viruses? Or is the fourth domain another sign that life as we know it actually originated as viruses? Answering those questions will be tough. And redrawing the tree of life will probably be even tougher. [Update: For lots more, go to Eisen's own blog post.]