Discovering how these frogs turn translucent could advance our understanding of human blood clotting, say researchers. 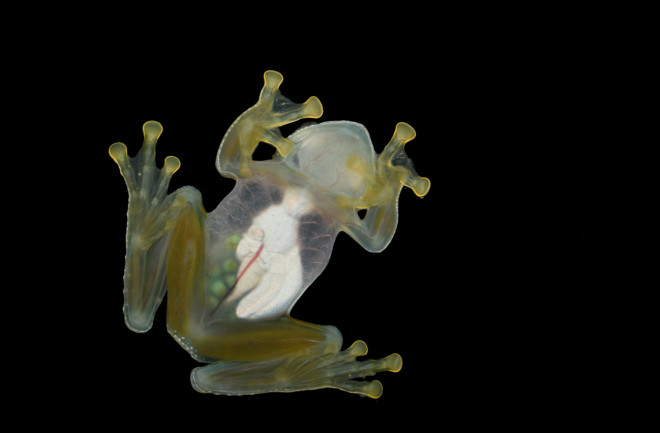 We’ve all wished for the ability to disappear at one time or another. But for glass frogs, several species of tree frogs that call the tropical forests of Central and South America home, that dream is a reality … sort of. The bottle cap-sized body of the glass frog boasts a translucent belly and chest.

It’s a particularly helpful form of camouflage because it prevents predators from spotting the frog’s otherwise recognizable silhouette. Now new research, published in Science in December, reveals how the amphibians accomplish this trick: They shunt nearly all of their red blood cells straight to the liver.

Many aquatic species, including certain jellyfish and crustaceans, have transparency on their evolutionary bingo cards, too — though it’s a bit easier for these sea-dwelling invertebrates. For one thing, light reflects differently when it's in air versus in water.

But for glass frogs and other invertebrates, the greatest challenge to translucency is their red blood cells, which naturally absorb light. Until recently, in fact, precisely how glass frogs wove their "invisibility cloaks" remained a mystery to scientists.

In the latest study, the authors focused exclusively on Fleishmann’s glass frog, or Hyalinobatrachium fleischmanni. These nocturnal amphibians are opaque at night, while actively eating and breeding. During the day, however, when they cling to the bottoms of tree leaves to catch some z’s, their bodies turn nearly transparent.

Taking Refuge in the Liver

The researchers used photoacoustic imaging — a technique that delivers laser pulses to bodily tissues and maps the ultrasonic waves that are subsequently produced — to figure out where the frogs’ rust-colored red blood cells were disappearing to.

In a lab setting, the researchers report, the amphibians increased transparency two- or threefold by packing 89 percent of their red blood cells into the liver.

Read More: These Tiny Frogs Traded Their Sense of Balance for Their Size

The researchers found that the organ, which is coated in reflective, mirror-like crystals to hide what's inside, grew by about 40 percent during the day. Then, when the frog wakes, its body redistributes this hoard of red blood cells within mere seconds.

Of course, researchers are still puzzled over how the glass frog survives such a state for up to 12 hours each day. Though plasma, the colorless part of blood, still circulates during this time, red blood cells are singularly responsible for delivering oxygen to the body’s tissues. In essence, the frog is simply going without.

Some have hypothesized whether the amphibians enter into a hibernation state that lessens the need for oxygen, similar to what some other frogs do during the winter, though only further research can confirm this.

Another lingering mystery is how H. fleischmanni avoids blood clots. For most vertebrates, including humans, blood cells stick together when they bump into each other — a process called coagulation. This is helpful in some instances, such as when a scab seals up a scratch, but it can also lead to serious health difficulties.

In the U.S., for example, an estimated 100,000 people die of blood clots each year. Determining how the glass frog manages to pack roughly 90 percent of its red blood cells into a space as small as the liver — without experiencing a clot — could revolutionize blood-clot research in humans as well.