Giraffes Get Their Spots From Their Mamas 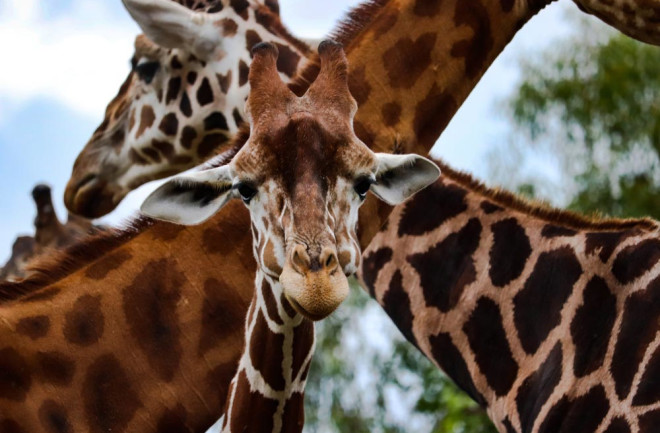 A new study shows that giraffes inherit the spot patterns, and these patterns are important to giraffe biology. (Credit: Beniamin Bagsik/shutterstock) Giraffes are pretty much known for one thing: their long, luxurious necks. As my three-year-old’s animal books make clear, rhinos have the nose-horns, lions have those manes and giraffes are the tall ones. That’s their thing. But observant animal lovers will also note that giraffes have spots. In fact, they helped lend the species their official name, Giraffa camelopardalis. Apparently the Greeks thought giraffes looked kind of like a camel with a leopard’s spots. And it turns out these distinctive markings are pretty important too. A paper out Tuesday in the journal PeerJ suggests a giraffe inherits at least some of its spot patterns from its mother, and that those patterns play a significant role in its survival. And, as a bonus, the research suggests a new way to study the marking of wild animals in general.

To be clear, the idea that heredity may explain a giraffe’s spots — uniquely arrayed upon each individual and unchanging over its life — is an old one. But biologists have finally tested out the theory by quantifying and analyzing the spot patterns on groups of related giraffes. For this study, the researchers specifically looked at the records of 31 wild mother-calf pairs and 258 newborns. The team examined the giraffes' spots along 11 categories, including how many there were, their size, shape, color and so on. They didn’t just eyeball it either, but used computer software to help measure the patterns, and statistical tools to measure the relationships. The team identified two traits that the mothers and calves had in common among their spots: circularity and solidity. “Circularity describes how close the spot is to a perfect circle,” the authors wrote. “Solidity describes how smooth and entire the spot edges are versus tortuous, ruffled, lobed, or incised.” Mothers and calves had extremely similar rates of circularity and solidity, so it really does seem like these specific characteristics are inheritable. With a trained eye, you might be able to distinguish individual families of giraffes just by looking at them. Relationship Goals But the researchers also found that a newborn’s spots had a significant relationship to its odds of surviving in the wild within its first four months. “Larger spots (smaller number of spots) and irregularly shaped or rounder spots (smaller aspect ratio) were correlated with increased survival,” they wrote. It’s tempting to speculate on just why those types of spots proved more useful, but these findings just show there’s a relationship, not what it is. (Correlation does not imply causation, as they say.) Maybe larger and rounder spots provided better camouflage from predators, or perhaps they influence temperature regulation, or better guard against parasites. More research could help fill in those blanks. And the best part is, this approach toward analyzing a wild animals’ markings with computers and statistics isn’t just limited to giraffes. The authors call their work “an important finding that adds an incremental step to our understanding of the evolution of animal coat patterns” — a field that is still relatively ripe for study. There’s much to learn about how those colorful spots and stripes came about, and the functions they serve.