Giants Lurking In The Drawer 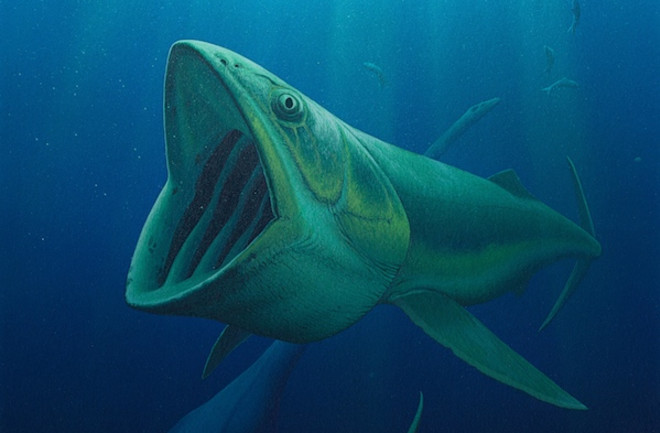 Paleontologists can make spectacular discoveries in remote badlands and deserts. But there are also things waiting to be found--or at least recognized--in the back rooms of museums. Things like giant filter-feeding fish. The giant filter-feeding fish in this painting was discovered by Matt Friedman, a paleontologist at the University of Oxford. Friedman knows a thing or two about the treasures lurking in museum drawers. As I wrote in 2008, he showed that previously neglected fossils were actually transitional forms that track the evolution of the bizarre bodies of flatfish. Recently Friedman took a trip to the Rocky Mountain Dinosaur Resource Center in Colorado to check out some other fish fossils. While he was there, the center paleontologists asked him to take a look at a massive slab of rock they had just brought in. They knew it contained a fish that dated back to some time between 89 and 66 million years ago, but they couldn't tell quite what sort of fish. Clearly, the fish was big. The bony shells that encased its eyes were the size of grapefruits. The slab contained huge scimitar fins. On closer inspection, Friedman recognized that the fish belonged to an extinct lineage of fish called pachycormids. Pachycormids branched off early from other ray-finned fish and evolved into tuna-like predators. As Friedman examined the fossil, though, he found something very strange. Its jaws were toothless. Instead, Friedman found a loose set of rods, each measuring over four feet long. The fish, which Friedman dubbed Bonnerichthys, did not bite its prey. Instead, it opened its mouth wide and trapped tiny animals in bony filters in its mouth. Today, a number of big filter feeders swim in the oceans. Among sharks and their relatives, filter feeding has evolved a few times, in forms such as manta rays and whale sharks. Baleen whales evolved filter feeding as well, and have evolved into the biggest animals ever--perhaps the biggest animals possible. Filter-feeding sharks and whales are relative new on the scene, only appearing after the end of the Mesozoic Era 65 million years ago. During the 150-million-year Mesozoic, the oceans were home to many giant marine reptiles. Yet none of them appear to have evolved into filter feeders. Scientists have puzzled why none of them evolved to take advantage of that particular niche. Perhaps there was some constraint that blocked them from that way of life. Bonnerichthys hinted at a different explanation. Paleontologists had previously found a few filter-feeding pachycormid dating back to a narrow time range around 160 million years. They generally dismissed these fish as a fleeting evolutionary experiment. But Bonnerichthys was another filter-feeding pachycormid living 100 million years later. Friedman began to scour museum collections for similar fish. As Friedman and his colleagues report today in Science, they found a number of new species spanning those 100 million years, which had gone unnoticed before. Instead of a dead-end experiment, the filter feeders enjoyed a 100-million year dynasty. In other words, the filter-feeding niche wasn't empty through the Mesozoic. It was occupied by bizarre fishes that no one had noticed before, even as their bones sat for decades in museum drawers. At the end of the Mesozoic, the pachycormids died off in the same pulse of extinctions that wiped out the big dinosaurs on land. And only then did other animals--sharks and whales--take over the filter-feeding way of life. Friedman won't speculate further about these remarkable animals for now. He's going to hunt through some museum collections instead. [Update 7 pm: Deep apologies for leaving off the painting credit! Image courtesy of Robert Nicholls, www.paleocreations.com]